The Malaysian Prime Minister Najab Rizak has told the world that Flight 370, the missing Malaysia Airlines jet, crashed into the Southern Indian Ocean in the waters off of Perth, Australia.

The plane was last heard from on March 8, having taken off from Kuala Lumpur in Malaysia after midnight. It was expected to land in Beijing at 6:30 a.m. The weather on the flightpath was calm.

1. The Malaysian PM Was Told of the Crash by UK Investigators

The conclusion that the plane crashed was made by the UK Air Accidents Investigation Branch (AAID). The satellite data being used by those investigators is from Inmarsat. The PM said that the kind of analysis used in the location has never been used before. Earlier today, Malaysia’s acting Minister of Transportation, Hishammuddin Hussein, said “There are new leads but nothing conclusive.”

2. The Malaysian Government Told the Families Via Text

Image: This is a readout of the text message sent to families by Malaysia Airlines on #MH370 – pic.twitter.com/q4CdNqdG3o

The families of the passengers were informed of this development via text message. The information had been relayed to them before the Malaysian PM told the world.

3. The Plane’s Suspected Location is in the Middle of the Ocean

The plane’s last position was in the “southern corridor.” A remote location with no possible landing area. Based on the plane’s last recorded position and the amount of fuel it was carrying, it was reported that Flight 370 either made it to the southern Indian Ocean or north towards Kazakhstan. 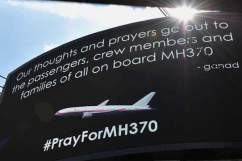 PHOTOS: Malaysian Government Telling the World There Are No Survivors of Flight 370

4. The Australians Suspected the Plane Crashed in the Indian Ocean

There will be another press conference on the loss of the plane tomorrow. Last week, Australian PM Tony Abbott informed his government that debris had been found by search teams in the waters off Perth.

New Chinese satellite images appeared to show two large floating objects in the waters near where the flight is believed to have crashed. The debris are of “reasonable size.” One of the objects is reported to be around 78 feet in length, which would match the wingspan of a Boeing 777. The Australian Maritime Safety Authority said one object is “a gray or green circular object.” Whereas the other is “an orange rectangular object.” No debris has been conclusively linked to the missing plane.

PHOTOS: Malaysian Government Telling the World There Are No Survivors of Flight 370

Read More
5 Fast Facts, Breaking News, Malaysia Airlines Flight MH370
wpDiscuz
0
0
Would love your thoughts, please comment.x
()
x
| Reply
The Malaysian PM has told the world that there are no survivors of MH370.