Chinese officials are reporting that they’ve uncovered a suspected Malaysian Airlines flight 370 crash site after reviewing satellite images.
The images were taken yesterday but weren’t released until today to be verified. CNN reports:

China’s State Administration for Science, Technology and Industry for National Defense announced the discovery, including images of what it said were “three suspected floating objects and their sizes.” The objects aren’t small at 13 by 18 meters (43 by 59 feet), 14 by 19 meters and 24 by 22 meters.

The Chinese agency gave coordinates of 105.63 east longitude, 6.7 north latitude, which would put it in waters northeast of where it took off in Kuala Lumpur, Malaysia, and south of Vietnam.

This news comes after an oil rigger in the South China Sea reportedly sent an email claiming he had seen MH370 crash into a fiery ball.
However, with media circus surrounding this strange disaster and the slew of conflicting reports released by various countries, this cannot be a confirmation that MH370 wreckage has been found. 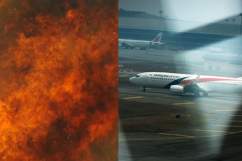