On Monday night, March 24, 2014 a shooting occurred at Naval Station Norfolk when a civilian opened fire on a policeman. Read on for the sad facts on the victim of the incident.

1. Mark Mayo Has Been Identified as the Victim

The father of the victim opened up about his son’s tragic death. According to the Associated Press:

Decondi Mayo says a Navy representative told him Tuesday that his son Mark Mayo had been killed.

Herald-Mail Media gives a full account of how Mayo lost his life this week:

Mayo, an enlisted 24-year-old military policeman, was killed Monday night when a civilian approaching a Navy destroyer at the Naval Station Norfolk took a weapon from a sailor who was standing watch and used it to shoot and kill Mayo, who was trying to help his comrade, Navy officials said Tuesday.

Apparently, the gunman was authorized to enter the base, but he was not permitted to be on the ship where the shooting occurred. WTVR reports:

The civilian had some type of proper identification to get onto the base, but he breached security to get onto the destroyer, the defense official said, speaking on condition of anonymity. 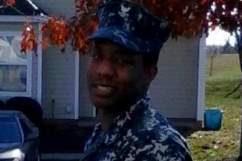 2. The Policeman Was Shot Aboard the USS Mahan

The USS Mahan is a docked ship at the Naval Station Norfolk, which is the world’s largest naval base. Around 11:20 p.m. last night, the incident occurred. Wavy.com reported:

The victim’s mother stated to the Associated Press that Mark Mayo “had been a military policeman since completing special forces training in 2008 and patrolled the base.” 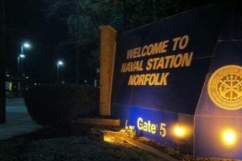 3. Mayo Became Interested in Law Enforcement at a Young Age

Mayo’s mother Sharon Blair opened up about her son’s interest in law enforcement to the Herald-Mail Media:

His mother, Sharon Blair, said Tuesday night that her son’s interest in law enforcement started to become evident when Mark, his siblings and she played cops and robbers when he was a child … It was a rare light moment for Blair, as the heart-broken mother talked about the love for her son and how she moved her family to Hagerstown from the Washington, D.C., area in 1998 to create a better life for them.

Blair continued to talk about what a close relationship she had with her son Mark and how they would go on movie dates together. She also talked about what a supportive person he was, his great love for his family and his loyalty. According to Blair, Mark Mayo frequented his brothers sports games at Williamsport and South Hagerstown high schools to show his support for his siblings. Other relatives told Blair about the shooting, but her fears were confirmed when U.S. Navy officials came to her house Tuesday around noon to inform her of her son’s death. While she is heartbroken, she wants it to be known that her son died a hero. Blair provided the Herald-Mail Media with some background on her heroic son:

Mayo had been a military policeman since he completed U.S. Naval special forces training in 2008, Blair said. He had been stationed in Bahrain and Spain, and patrolled the U.S. Navy base in Norfolk, she said. Mayo was born in Washington, D.C., and attended a private school in Fort Washington, Md., for kindergarten and first grade, she said … He attended District of Columbia public schools for about a year then attended school in Prince George’s County, Md., his mother said. Then she made the decision to move to Hagerstown to get her family away from the dangerous conditions in the Washington area.

Blair continues to talk about her son and the many things they did together as he grew up, saying she always tried to do right by her children. When Mark Mayo was in high school at Williamsport High, he was on the wrestling team for two years and once placed first in the county in his weight class. He was also a longtime member of the Full Life Family Ministries Church with his family on West Lee Street in Hagerstown. In fact, the pastor of the church, Paul L. Berry, Sr., remembered Mayo along with his family on Monday night.

Prayers go out to the soldiers family that was killed at the Norfolk Naval Base today…thank you for protecting our country, sir.

Across the nation, many have expressed their sadness over the incident on Twitter and have extended their condolences to the families affected by the shooting.

Prayers go out the Norfolk Naval Base. Just found out there was a shooting. Two people were killed, a sailor and a civilian. It's just sad

Mayo will be buried at Arlington National Cemetery.

Read More
Navy, Shooting, Twitter
Follow Heavy ↓
Last night a policeman at Norfolk Naval Station was shot and killed by a civilian gunman. The identity of the victim has been revealed as Mark Mayo.