Mike McKay of New Zealand was working on the Songa Mercur drilling platform off the Vietnamese coast on Saturday when he claims he saw MH370 burst into flames and crash.
His email was sent on Saturday, but he wasn’t sure if it was received so he released the email to the press today.
You can read the email in the embedded tweet below.

When I observed the burning (plane) it appeared to be in one piece.

From when I first saw the burning (plane) until the flames went out (still at high altitude) was 10-15 seconds. There was no lateral movement, so it was either coming toward our location, stationary (falling) or going away from our location.

If this proves true, it would disprove Malaysian military reports that MH370 changed course and headed west to the Strait of Malacca.
Just another puzzle piece in this strange, strange mystery. 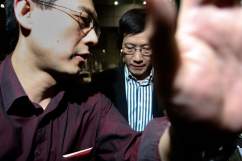