Michigan State Police have told the media that the truck of missing Canadian hockey player Terry Trafford, 20, has been found in Saginaw, Michigan, reports The Toronto Sun. His father has told reporters that his son’s dead body was inside. Reports suggest that he died of an overdose of ketamine.

Trafford was a center with the Saginaw Spirit in the Ontario Hockey League.

1. He Was Suspended From the Team For Smoking Weed

According to his team’s president Craig Goslin, Trafford had been sent home to Toronto for some disciplinary reason last week. Goslin told MLive, “He was sent home for a violation of rules.” President Goslin though stated that Trafford’s career with the Saginaw Spirit was not over:

That would have been up to Terry. He’d have to change his behavior and make some adjustments. He was on the roster.

His father, Roy, told Global News that his son had been suspended for smoking weed. At the time of his suspension, Trafford was living with the team’s president and his wife.

2. He Was Found in a Wal-Mart Parking Lot

The truck was found in a parking lot in Saginaw Township. Michigan State Police Lt. Brian Cole said the body is that of a “young man.” Trafford’s truck is a 1995 Green Chevy Sierra Pick Up Truck, Michigan License Plate # CJA 2235.

Friends of Terry Trafford are on scene. Police say they don't know how long until ID will be made. #liveonnbc25 pic.twitter.com/UBIJHesmjC

3. He Was Last Seen at the Team’s Stadium

Trafford was forward with the Saginaw Spirit in the Ontario Hockey League. He was last seen alive at the team’s Dow Even Center on March 3. Having played for the Spirit for four seasons, he recorded 29 goals and 49 assists over the course of 221 games. He would have been eligible for the NHL draft this year.

4. Police Didn’t Think He Had Crossed the Border

Michigan State Police had been working with Toronto cops in a cross-border operation to find Trafford since the weekend. According to The Spec, police didn’t think that Trafford had crossed back over the border from Saginaw (Michigan) to Canada, where he is a native and where his parents still live. He was a graduate of Heritage High School.

5. Trafford Threatened to Kill Himself on March 1, Says His Girlfriend

His girlfriend, Skye Ciesziak, told The Toronto Sun that Trafford suffered from depression. She also says that he told her he was going to kill himself on March 1. His girlfriend said that his depression was related to his being suspended from the team. According to Michigan Live, Trafford had texted her saying his “life was over and that he didn’t want to do it anymore.”

I catch myself screaming at you and crying for you at the same time.. 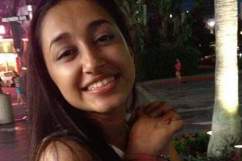