As the world looked to Ukraine and wondered what the new Russian-occupied Crimea will look like, they were surprised to meet 33-year-old Natalia Poklonskaya. Poklonskaya, a young prosecutor, was appointed to the position of Crimean Attorney General.

Here’s what you should know about this political newcomer — and why they’re obsessed with her in Japan:

1. She Was Appointed Attorney General of ‘Autonomous’ Crimea

On March 11, five days before the referendum that voted to turn Crimea into an autonomous region of the Russian Federation, Poklonskaya was appointed to the position of Attorney General for Crimea.

Toeing the line of the Russian-backed referendum, the new attorney general told the Voice of Russia on the day of the vote that regardless of Crimea becoming either independent or part of Russia, it would never be part of a Euromaidan Ukraine.

On March 13, a Japanese YouTube channel posted the above press conference with Poklonskaya, and it instantly went viral, getting hundreds of thousands of views in a week. Why? Well, because she’s pretty.

Japanese news outlet RocketNews24 collected some of the more bizarre comments left on the YouTube video, including, “Summon me for questioning! I’ll tell you everything I know! I’ll even tell you everything I don’t know!” and, “Ukraine has such a high percentage of devastatingly beautiful women. This is a battle I cannot avoid. Be right back; going to Crimea.”

The obsession grew as Japanese-style anime drawings of Poklonskaya began popping up all over the web. You can see a collection of them here, at Poklonskaya’s Facebook fan page.

3. She Served as a Senior Prosecutor for Simferopol

Before being promoted to attorney general, Poklonskaya served as a prosecutor for the Crimean city of Simferopol, the capital of the region. There, she was a harsh critic of the Euromaidan protests in the more westernized city of Kiev and extended welcome to Berkut police officers fleeing the new interim government.

She told the Voice of Russia, “What happened in Kiev was, first and foremost, an anti-constitutional coup and an armed seizure of power. That’s what my feeling has always been and that’s the opinion I wasn’t afraid to voice [while still working] at the Ukrainian Prosecutor General’s Office.”

4. Images of Her Went Viral

Pictures of Poklonskaya reclining on a couch and in less formal attire than the uniform she’s usually seen in, appeared around the web, with sources like the Daily Mail saying that they emerged from Russian “social media sites.”

These pictures have only added to the media’s, and apparently Japan’s, fascination with the new Crimean attorney general.

5. Russia’s Annexation of Crimea Was Made Official

On Friday, March 21, Russia’s acquisition and annexation of Crimea was made official when the Russian parliament approved the annexation with an overwhelming majority. President Putin signed the treaty that merged the two countries three days before the parliament vote. 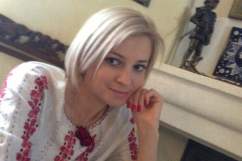