Rachele Cateyes, a blogger from Milwaukie, Oregon, is demanding answers from diet company Venus Factor. The self-proclaimed “fat babe” wants to know why someone used a bikini photo she uploaded to her popular blog Nearsighted Owl — a picture shared to portray her positive body image — as the degrading “before” portion of a “before and after” setup.

1. She Became a ‘Before’ Photo Without Her Consent

Last summer, Cateyes posted a picture of herself in a bikini to her blog, she posted an empowering message with it saying:

Wearing a bikini as a fat woman is an act of rebellion. I felt glorious and glamorous all at the same time. I wore my stretch marks as ribbons of honor and let the sun kiss my lumpy thighs and arms without a care in the world.

Then, in early March, she logged onto Facebook and realized that a scam-y diet company called Venus Factor was using her picture with captions over it such as, “Trying to lose weight? Having trouble? Click here to check our solution.”

2. She Posted a Video of How You Can Help

Cateyes started a big campaign to get the ads taken down, but with limited success. After futile attempts to get in touch with the company, she learned it was an affiliate of a larger company that gets sad people to buy quick fixes and supplements.

On her blog, she chronicles how after weeks, someone from the company finally got in touch with Venus, which passed the buck onto another company that handles their ads. As of March 14, the ads are still not down. You can watch the video above to see what you can do to help.

3. She Runs an Etsy Where She Sells Image-Positive Portraits

Rachele Cateyes is also an artist who sells commissioned portraits, as you can see above. On her Etsy page, she describes her work as:

Are you a spooky babe? Femme? Vintage fanatic? Masculine? Queer? Cis? Rachele will capture your personality and awesome fashion in a round hand drawn avatar. So get your paws on a Fat Babe, whether you want to be surrounded by pizza or depict all your rad tattoos, we can do it!

She sells small, drawn avatars for $25.

For years, Cateyes has been spreading and image-positive message in an attempt to reverse the prolific fat shame the permeates American society. She writes on her blog:

I am a fat bitch spreading the word on positive body image and the fat acceptance movement. I post about fatshion, feminism, and lessons about loving your fat body, living a fierce life and feeling confident. Sometimes I draw and write good. I shoot from the hip and can swear like a sailor.

On her blog she’s written posts titled, “I Don’t Fit in My Husband’s Shirts. Get Over it,” “Shame Loss Ads,” “Double Chins Are Fierce” and “Letting Go of the Thing Fantasy.”

Yahoo reported that Facebook released a statement regarding Cateyes’ complaint and the use of her photo without permission saying:

Facebook prohibits anyone from posting copyrighted content to Facebook unless they own the copyright or are authorized to share it. We encourage people who believe their intellectual property rights are being infringed to reach out to the individual posting the content or report it to us using our reporting tools. 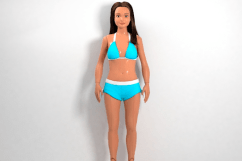 Lammily, The Realistic Barbie: 5 Fast Facts You Need to Know

Read More
5 Fast Facts, Breaking News, Facebook, Feminism, Oregon, Women
Proud fat-activist blogger Rachele Cateyes wants to know why a diet company used one of her bikini pics as a "before" photo in a Facebook ad without her permission.