If there was any doubt that Vladimir Putin wasn’t preparing Russia for War World III, this latest development just put that idea in the coffin.

Putin is reviving a Stalinist USSR program from the 1930s titled “Ready for Labor and Defense”, abbreviated to “GTO” in Russian.

GTO is a system of tests Russians pass to earn a government-given badge that says they’re capable to perform certain tasks. Though it changed after World War II and into the Cold War, its original goal remained the same: have Russians citizens healthy enough that they are prepared to fight.

The system fell apart with the dissolution of the USSR in 1991.

It hasn’t been revealed what the modern version of the program will consist of, but back in the U.S.S.R it required comrade citizens to enter competitions in sports like running, jumping, skiing, swimming, and, well, grenade throwing. Tests were set and those who passed were given gold and silver badges that were worn with pride on proletarian chests. 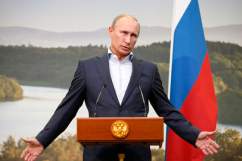 Loading more stories
wpDiscuz
0
0
Would love your thoughts, please comment.x
()
x
| Reply
Is Russia preparing for war by getting its citizens fit?