The situation in Snohimish County, Washington, has been described by authorities as “very grim.” Sixteen people have been confirmed dead after a mudslide hit the area on the morning of March 22, some are saying the death toll may have reached 24. Hundreds of people remain missing across the county. Dozens of homes and businesses are no more in the town of Oso. In some places, the mud pools are up to 60 feet deep.

Here’s what you need to know about this American tragedy.

In this handout from Washington State Dept of Transportation, an aerial view of the mudslide that blocked the Stillaguamish River March 23, 2014 between Darrington and Arlington, Washington. Dozens of people have been confirmed dead and over 100 are still missing after a massive mudslide leveled homes and blocked a river and a road. (Photo by Washington State Dept of Transportation via Getty Images)

Snohomish County Department of Emergency Management director John Pennington told the media on March 24, We have 108 individual names, or likeness. It’s a soft 108, the number is no question going to decline dramatically.” Additional searches on March 23 did not recover anymore dead bodies to add to the 14 people who were found dead the day before. By the end of March 24, despite promises from authorities that the number would not rise, 176 people were declared missing, reports USA Today. Pennington said that some of the names on that list may be duplicates and that some of the descriptions of the missing have been vague. Telling reporters, Pennington said:

In some cases, that list is very detailed. It’s ‘John, who has brown hair, blue eyes and lived in this particular neighborhood. In a lot of cases, it’s a name like Frank, ‘I met him once. I think he lived over there.

2. 8 People Are Injured in Hospital

An infant boy and an 81-year-old man are among the most seriously injured in hospital. Both are in critical condition. Officials are still hopeful of finding more survivors, but it gets harder with every passing hour. “This is very grim, we have not found anyone alive on this pile since Saturday,” Snohoimish County Department of Emergency Management John Pennington said. Another two men, ages 37 and 58, were in serious condition but making good process.

3. A 1999 Report Warned of ‘The Potential For A Large Catastrophic Failure’

Maurice Vincent (R) chats with a friend outside of a grocery store March 24, 2014 in Darrington, Washington, a neighboring town to Oso. (Getty)

In a Seattle Times report, a document given to the U.S. Army Corps of Engineers warned that Oso was ripe for ‘catastrophic failure.” The document was written by geomorphologist, Daniel Miller, who told The Times, “We’ve known it would happen at some point. We just didn’t know when.” Miller said that he has studied the unstable hills around Oso were the mudslide happened since the 1950s. In 2006, he was shocked to find that, just after a smaller slide in the area, he saw carpenters building news houses along a stretch around directly beneath a dangerous hill.

The latest search efforts, which involved land and air teams, brought no signs of life, according to Snohomish County Fire District 21 Travis Hots. Among the missing is plumber, Steve Neal, 52. Another woman, Summer Raffo, is believed to have been trapped under her car. Christina Jefferds and her granddaughter Sanoah Huestis are also missing, presumed trapped. Snohomish sheriff Lt. Rob Palmer said on March 24, “It’s very disappointing to all emergency responders on scene.” Dave Norman, a geologist, said that the mudslide was still moving as of March 24. The catastrophe covers a square mile, Norman added, “This is one of the biggest landslides I’ve ever seen.”

According to census data, Oso has a population of less than 200 people. The mudslide is believed to have been created by a month of heavy rainfall in the area. Chief Hots had described the mudslide as being more “like quicksand.” The mud was so dense on the night of March 22 that rescue workers had to suspend their search despite being able to hear cries of help.

A family waiting for news at a shelter in Darrington, Washington. (Getty)

According to estimates, there are 25 full-time homes, 10 vacation homes, a cabin and 13 temporary homes. The small, tight-knit community, had historical buildings that were more than 100 years old. Most are no more. The American Red Cross have set up shelters for those left homeless at Post Middle School in Arlington, Washington, and another at community center in nearby Darrington. 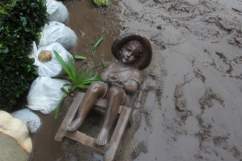 Washington State Mudslide: The Photos You Need to See