Most of the area around Victory Park, Dallas, has been locked down by police as a shooter has barricaded himself in an apartment building, reports The Dallas Morning News. The standoff began at around 10 a.m. this morning.

1. The Man is Fighting Eviction

The man is in his 40s and his holed up in an apartment. The Morning News understands that he is in the process of being evicted from the home.

2. The Whole Area Around Victory Park is Locked Down

The apartment complex is locked down, along with most of the local area, including, schools, hospitals, hotels and museums, reports My Fox Dallas/Fort Worth. The apartment building is a 2345 N Houston St. The streets around the area, Olive Street, Museum Way, Highmark and Victory Park Avenue are shut down.

3. There is a Massive Police Presence on Scene

Cops have surrounded the building, with SWAT teams also on scene. At 12:05 p.m., the Dallas PD threw a flash bang into the apartment to distract the suspect. Lt. Max Geron told WFAA:

A flash-bang is a distraction device that produces a loud noise and brilliant flash of light designed to distract and disorient a suspect.

4. Windows Are Shot Out in the Complex

Some windows in the complex appear to have been shot out. There are no reported injuries. Fox Dallas reports that three shots have been fired in the incident. A resident of the apartment complex told CBS DFW that he received an email warning about an armed man in the building and to shelter-in-place.

5. The Suspect Has Not Yet Been Identified

Dallas police have said that the man has previously been arrested, according to NBC Dallas/Fort Worth. 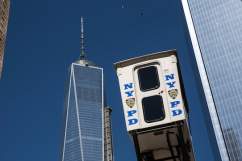