A funnel cloud became a tornado in northern Missouri according to multiple storm spotters in the area, reports KCTV 5.

1. There is Already Damage in Trenton

There is damage reported along a highway just outside the town of Trenton. The Kansas City Star reports the Daviess County Sheriff’s Department saying that “some property damage due to high winds near Winston, MO.”

2. Up to 3 Towns Could Be Affected

The tornado is also close to the towns of Jamesport and Milan, Missouri.

3. Earlier in the Day There Were Massive Hailstorms

It was first spotted at around 3:55 p.m. The heavy winds were preceded by golf-ball sized hailstorms, reports Fox Kansas City.

4. Tornado Warnings Are in Affect in Multiple Counties

Tornado warnings are in affect in Daviess and Grundy counties in the area.

5. The Tornadoes Are Isolated Around Northern Missouri

KCTV 5 reports that the areas around Kansas City are not likely to be affected by a tornado. Though the metro area is still experiencing stormy weather. 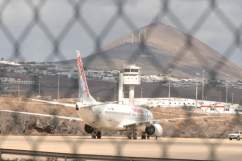