1. He Knows At Least One of His Alleged Victims

The charges stem from April 2013 when Kaplanyan was first accused of raping a woman, whom he knew, at a residence hall at UCLA, reports The Los Angeles Times. Now, NBC Los Angeles reports that there are two other victims who are accusing Kaplanyan of raping them between October 2012 and April 2013.

2. Kaplanyan Could Face 37 Years in Prison

He will appear in court at 3:30 p.m. local time today in Los Angeles to answer to the charges. If found guilty on all counts, he will face 37 years in prison.

3. He’s Been Suspended From School Since April 2013

Since the first allegation in April 2013, Kaplanyan has been suspended from UCLA and forbidden from going on campus. He appealed the suspension but lost. His lawyer, Berc Agopogulu, told The Los Angeles Times back in April 2013, “We believe this matter wil be resolved once the investigation is complete. Needless to say, Mr. Kaplanyan and his family are devastated and shocked by the recent developments. They kindly request their privacy be respected and would like this matter be resolved fairly and expeditiously.”

4. His Mother Says Kaplanyan is ‘Not One of Those Guys’

In 2013, a group of his friends and family made a YouTube video declaring Kaplanyan’s innocence (above).

His mother, Marine Kaplanyan told KTLA that she believes her son is innocent:

It’s so easy for them to just accuse a person without, like, telling the truth. My son is innocent, I can tell you that and we’re going to prove that, because he’s not one of those guys.

5. He Was a Record-Setting Water Polo Prodigy

As a graduate of Hoover High School in Glendale, California, Kaplanyan set a California schools water polo season record with 229 goals. According to KTLA, his bail has been set at $590,000. 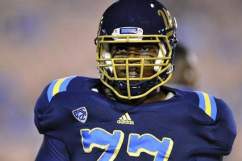