The suspicious package, a briefcase, was found to not contain any harmful materials.

The National Air and Space Museum in Washington D.C. has been evacuated after reports of a suspicious package being found on the building’s second floor, reports NBC Washington.

1. The Building is Being Searched

Just got evacuated from the National Air and Space Museum! The whole place just got cleared. Hope everyone's safe!

The entire building has been cleared and the building is being searched by cops and the fire department.

2. There Was a Passed Out Man Near the Package

A man was also found passed out on the second floor close to where the package was found. Lelani Woods, a spokeswoman for the Park Police, said “We are trying to determine if the package and the man are related.”

3. There Are Street Closures All Around the Museum

4. There is One Claim of a Fire in the Building

On tweeter claimed she saw a fire in the museum.

5. This is the First Major Incident at the Museum This Year

The last time the museum was in the news for the wrong reasons was in December 2013, when workers protested the low wages they were being paid at the facility. 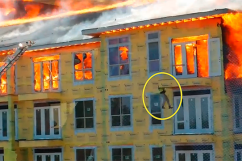 Read More
5 Fast Facts, Breaking News, Washington
Follow Heavy ↓
There are reports of a "suspicious package" being found on the second floor.