The National Transportation Safety Board is investigating in the train derailment that occurred at Chicago’s O’Hare airport at around 3 a.m. Monday morning. The CCTV video of the incident, which injured over 30 passengers, was released on Youtube and can be watched by clicking the play button above.

News outlets like USA Today now wonder if a dozing conductor could have been the cause of the incident after the train did not slow down from its standard speed of 25 mph has it made its way through the station. Although investigators say the automatic emergency braking system was activated, it failed to stop the train on time.

You can watch a newscast update from the incident below: 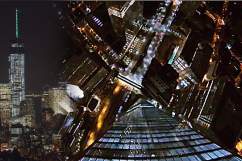