ON March 18, TED2014 had a surprise speaker, NSA Whistleblower Edward Snowden. Snowden, who has had temporary asylum in Russia since last summer, spoke to the crowd through a futuristic moving video chat robot, and the crowd loved it.

What the crowd did not love was some of his news. “There are absolutely more revelations to come. Some of the most important reporting is yet to come.” Snowden also told people on the fence about the issue why they should care about surveillance:

But your rights matter because you never know when you’ll need them. In democratic societies around the world, people should be able to pick up the phone, call family, send text messages to loved one, travel by train, buy an airline ticket — without wondering how those events will look to an agent of government, possibly not even your government but one years in the future. How might this be misinterpreted? We have a right to privacy. We require warrants to be based on probable causes. Trusting any government authority with the entirety of human communications without any oversight is too great a temptation to be ignored.

You can watch the video above, you read the full transcript here. 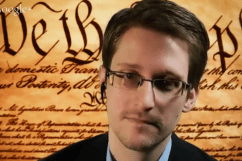 Loading more stories
wpDiscuz
0
0
Would love your thoughts, please comment.x
()
x
| Reply
Whistleblower Edward Snowden spoke via moving video chat robot at Ted2014 saying the most shocking revelations are yet to come, and why you should care.