In case you weren’t sick of the snow yet, the Midwest, Mid-Atlanic, and New England are bracing for the newest winter storm. Winter storm Titan, as named by the Weather Channel, is poised to drop tons of snow, ice, and sleet.

Here is what you need to know about the impending storm:

1. Titan Stretches All the Way Across the Country

Inclement weather and snow will range from northern California, all the way to New England this weekend as Winter Storm Titan stretches over 1,000 miles at a time. The Weather Channel estimates that millions of people at a time will be affected as the storm sweets across the country.

2. Over Six Inches Is Expected From the Plains to Massachusetts

A solid six inches of snow, preceded by an estimated inch of ice and sleet, is expected from a large swath of land between Kansas City, Missouri, and Massachusetts.

3. Airports in the Northeast are Expecting Delays & Cancelations

This winter has been a headache for regular travelers as flights across the country have been routinely canceled due to weather. The Weather Channel is predicting that flights from the Midwest to New England, will be delayed or canceled from Saturday through Monday as the storm moves east.

Before traveling, check with your airline or airport to double-check your flight’s status.

4. The Heaviest Snow Will Fall in Central Pennsylvania

Amid the large column of 6 inches of accumulation, some areas in the Mid-Atlatnic region and New England are expected to get more snow. The heaviest snow fall is predicted for Central Pennsylvania where up to 18 inches could accumulate on Sunday and into Monday.

5. This is a Record-Breaking Winter

According to USA Today, Titan is the 20th named storm this winter. Across the United States, and especially in northern Midwest, snowfall totals are shattering records and being recorded as the second or third coldest and most snowy winters in history. 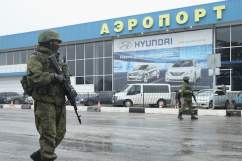 Loading more stories
wpDiscuz
0
0
Would love your thoughts, please comment.x
()
x
| Reply
Yet another named winter storm is heading toward the mid-Atlanic and Northeastern region.