A helmet-cam video of the stunt has just been released, and four men have been arrested in connection with the jump.

Check out the scary footage above. It was posted to YouTube with this caption:

The three jumpers and their “lookout” claim that their stunt was exhilarating and was not meant to be disrespectful. Unfortunately for them, police feel differently and the men are facing felony charges. According to Good Morning America, the men have also been forced to surrender their passports. 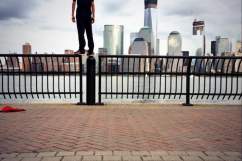 Read More
Inspirational, New York, New York City, Raw Videos, Stunts, Youtube
Four men were arrested yesterday for the September 30 stunt, and for the first time their video has been made public.