People look at a memorial quilt in honor of the Boston Marathon bombings on Monday, April 14. (Getty)

Even in normal years, few sporting events attract bigger crowds or more fanfare than the Boston Marathon, which annually draws more than 500,000 spectators and more than 20,000 participants.

But this year’s race, the first since the bombings that killed three people and injured more than 260, is sure to be extra special.

It’s the 118th running of the race, which is the longest running marathon in the world and the second longest running race, trailing only the Buffalo Turkey Trot. The race takes place on Monday, April 21.

Here’s what you need to know about it:

People shop for running shoes Sunday, April 3 inside Marathon Sports. One of the bombs at last year’s marathon went off directly in front of the store (Getty)

The Boston Globe reports that race officials at the Boston Athletic Association are letting 9,000 more people participate this year than were allowed to run last year, bringing the total to more than 36,000. The record for entrants is 38,708 in 1996 for the 100th running of the race.

The Boston Athletic Association is expecting more than 1,800 media members from more than 300 outlets to cover the race.

The race starts with mobility-impaired entrants leaving the start line in Hopkinton at 8:50 a.m., with wheelchair entrants, elite women, elite men and other runners to follow.

The finish line, in Boston’s Copley Square, was set up Monday, in advance of a ceremony Tuesday commemorating the one-year anniversary of the bombings.

The official finish line has been set in advance to tomorrow's tribute. pic.twitter.com/SRxdszhy5O

3. Security Will Be Tight

Law enforcement agencies are tightening security in several ways. Runners will no longer be allowed to bring bags, additional barriers will be set up between runners and spectators, and the FBI will have agents on site.

The heightened security will mean runners known as “bandits” — those who don’t qualify for a bib but run the full course anyway — won’t be able to run. In order to maintain the bandit tradition, students from Boston College organized a Bandit Marathon on April 13 in which participants ran the full course.

Law enforcement officers were busy tending to potentially dangerous situations before and after Tuesday’s ceremonies. Police detonated what they thought might have been a pipe bomb Tuesday morning at a Massachusetts Department of Transportation building, and arrested a man who was running along Boylston Street yelling “Boston Stong” and later claiming he had a rice cooker.

4. The Red Sox are Home on Marathon Monday Against the Orioles

As is always the case on Marathon Monday, the Boston Red Sox will play at home on 11 a.m. — a start time that allows fans to be able to make the short walk from Fenway Park to the finish line after the game.

The bombs last year went off just minutes after the Sox’s game against the Tampa Bay Rays, and the Sox dedicated the rest of their season — which culminated in a World Series championship — to the Marathon victims.

The Sox honored the marathon victims before their home opener April 4 against the Milwaukee Brewers, and will do so again on April 21. (Carlos Arrendodo, who helped first responders give medical attention to those wounded in the bombings, is pictured above at the home opener.)

I hope we would strike the right balance of a respectful acknowledgement of what happened but we certainly don’t want to go over the top or go too far with it. We were all affected in our own personal ways. I can tell you one thing, Fenway has been a gathering place in the Boston community. There will certainly be recognition and it’ll be a very emotional day.

5. The Marathon is a Huge Boost to the Local Economy

A woman looks at Boston Strong merchandise in advance of this year’s marathon. (Getty)

Here’s a breakdown of the organization’s projections, courtesy of the Boston Athletic Association. 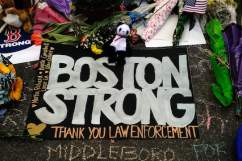