Lee Joon-seok, pictured above at his only public appearance since the accident, is the captain of the South Korean ferry boat Sewol, which sank in the Yellow Sea on Wednesday, April 16. The 69-year-old ferry captain was reportedly one of the first to abandon ship and was not at the helm when it started sinking. Of the more than 450 people on the ferry when it sank, 179 have been rescued, and 28 of the 300 people missing have been confirmed dead.

1. Prosecutors Are Seeking an Arrest Warrant for the Captain

According to the BBC, prosecutors are seeking arrest warrants for Captain Lee Joon-seok and two other unidentified crew members. Although it is not clear exactly what Joon-seok is believed to have done, or even why the boat sank, police are interested in a sharp turn that may have dislodged heavy cargo and unbalanced the boat.

The other allegation being brought against the captain, according to CNN, is that he was not in the steering room when the ship started to sink. A third mate was steering the boat during the incident.

The Guardian reports that he Joon-seok escaped from the vehicle 40 minutes after the boat ran aground.

2. He Gave an Apology on TV

In the video above, the captain gave an apology during his first and only public appearance since the ferry disaster. Wearing a gray hooded sweatshirt and hiding his face, Joon-seok told viewers he was “really sorry for the passengers, victims and their families and am deeply ashamed. I don’t know what to say.”

3. He Was Questioned by the Authorities

NBC reports that after the incident, the captain was questioned by the Korean coast guard but was released. Information about this interview has not been released to the public.

4. Passengers Were Told Not to Move

Relatives check the survivor lists as they wait for missing passengers of a sunken ferry at Jindo port on April 16, 2014 in Jindo-gun, South Korea. (Getty)

As the ship sank, terrified passengers were told, according to a recording procured by CNN and TYN, “Don’t move. If you move, it’s dangerous. Don’t move.” The passengers who defied orders, put on life vests and jumped into the water were those who survived, according to CNN.

5. A Rescued Vice Principal Hanged Himself

As the death toll from this terrible incident grew, this morning news emerged that Kang Min-Kyu, the vice principal of Danwan High School, had hanged himself because of the ferry disaster. Kang Min-Kyu was chaperoning around 300 students from the high school on a field trip to Jeju island when the ship capsized and a majority of his students were reported either missing or dead. He was one of the few people rescued from the ship.

He reportedly hanged himself from a tree near where all of the family members of the missing passengers have been staying. 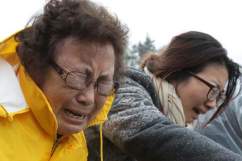 Read More
Breaking News, South Korea, Tragedy
wpDiscuz
0
0
Would love your thoughts, please comment.x
()
x
| Reply
Captain Lee Joon-seok, 69, may be arrested for his alleged inaction during the sinking of the Sewol, the South Korean ferry that sank carrying over 450 people.