Today, on April 1st, Carnegie Museum of Art in Pittsburgh claimed they’ve discovered hidden zombies in a landscape painting from their collection.

From their blog the story goes:

During recent analysis of 19th-century works, conservators evaluated sections of over-painting on a landscape attributed to Asher Brown Durand, Pastoral Landscape, (c. 1854–1861). Upon cleaning and removal, the subject of the painting appears to be shambling zombies, emerging from the woods, presumably to eat the artist’s brains.

Apparently that’s why the zombies in Pastoral Landscape were covered up, to keep with Victorian norms. 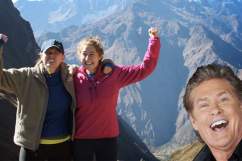 Loading more stories
wpDiscuz
0
0
Would love your thoughts, please comment.x
()
x
| Reply
A Pittsburgh museum is trying to get in on the prankster fun.