Clayton Lockett was due to be the first man executed by authorities in Oklahoma on April 29. While the poison was being administered, the doctor in charge said “the line had blown.” Leaving Lockett writhing in pain. Witnesses say that he allegedly shouted “Oh man.” He died soon after of a heart attack, reports The Oklahoman. Charles Warner’s execution, which was due later the same night, was postponed.

1. Lockett Got No Painkillers or Sedatives

Lockett’s lawyer, David Autry, described the scene of the execution as being “like torture.” Autry added, “This was botched. It was difficult to watch.” The first drugs, a painkiller and a sedative, were not administered properly according to reports. Authorities failed to notice this and began administering a paralytic and a drug to make Lockett’s heart stop. Those drugs went into Lockett’s system successfully. Though without the painkiller and sedative, Lockett would have been in agonizing pain.

Gov. Mary Fallin, the governor of Oklahoma said after the botched execution:

I have asked the Department of Corrections to conduct a full review of Oklahoma’s execution procedures to determine what happened and why during this evening’s execution of Clayton Derrell Lockett.

The following day she confirmed that there would be no further executions in the state until a full investigation had taken place.

3. There is Growing Concern About Where States Get Lethal Drugs

Lawyers for Lockett, and other man who was due to be executed, said that the lack of knowledge about the drugs being used in lethal injections may be unconstitutional. The New York Times reports that there is:

…growing tension nationally over secrecy in lethal injections as drug companies, saying they are fearful of political and even physical attack, refuse to supply drugs, and many states scramble to find new sources and try untested combinations. Several states have imposed secrecy on the suppliers of lethal injection drugs, leading to court battles over due process and the ban on cruel and unusual punishment.

Clayton Lockett's execution was botched, much like that of his victim whom he shot in the head and buried alive (after raping her friend).

5. The White House Said Lockett’s Treatment Was Not ‘Humane’

The White House has weighed in on the botched execution, saying that it “fell short” of humane standards. Jay Carney, the White House press secretary, reiterated that President Obama feels that there are some crimes that are so reprehensible, the death penalty is necessary. 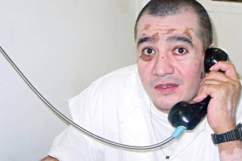 Loading more stories
wpDiscuz
1
0
Would love your thoughts, please comment.x
()
x
| Reply
Clayton Lockett was scheduled to be executed on April 29. After his "lethal injection" was botched, Lockett died of a heart attack.