A stabbing at Franklin Regional High School in Murrysville, Pennsylvania, has left several people injured, some severely. The suspect, 16-year-old Alex Hribal is in custody.

The school is located about 17 miles from Pittsburgh.

1. 20 People Were Injured in the Attack

NBC Washington reported victims range in age from 15 to 60. However, AP initially reported that all of those injured were between the ages of 14 and 17. After some confusion, the police finally confirmed that one of the 20 people injured was a faculty member, identified as the school security guard. You can here the full 911 call to authorities above.

Some of those injured did not suffer stab wounds.

CBS Pittsburgh reports that of the 20 injured, nine have been hospitalized.

2. Student Alex Hribal Is in Custody

Hribal is in custody and is being questioned by the authorities, reports the AP. WPXI reports that he is a sophomore at the high school.

Rick Earle reporting that the stabber is a sophomore at Franklin Regional HS. 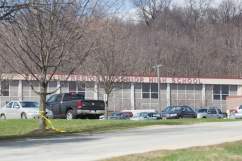 3. At Least 9 People Have Been Transported to Nearby Hospitals

According to CBS Pittsburgh, nine people have been transported to local hospitals. Officials at Forbes Hospital say the hospital has received eight victims. One was flown to Allegheny General Hospital, two were sent to UPMC Presby, one was sent to UPMC East, one to Children’s, and one to UPMC Mercy.

Although CBS Pittsburgh is reporting that only four of those injuries are considered “serious, WPXI reporter Peggy Finnegan all are expected to survive. Most of the injuries sustained were puncture wounds to the trunk and torso. Three of the victims are already undergoing surgery.

Those stabbing victims with the most serious injuries have puncture wounds to the trunk and torso. #WPXI

4. School Was About to Begin During the Attack

According to CBS Pittsburgh, the school resource officer called in the incident at 7:13 a.m. local time. At that time, students were entering the school for the day’s classes. That was when, according to witness reports, Hribal began running through the halls and into classrooms wielding two knives and stabbing people.

5. The Assistant Principal Wrestled The Knife Away

According to witness reports and a number of grateful students on Twitter, the assistant principal helped wrestle the suspect to the ground and get his knives away from him.

Hearing from Dr. at Forbes Regional that 1 student saved another student’s life by applying pressure to the wound!

There is also one reported instance in which a student applied pressure to another person’s bleeding wound while they waited for authorities.

Loading more stories
wpDiscuz
0
0
Would love your thoughts, please comment.x
()
x
| Reply
A stabbing at a high school in Murrysville, Pennsylvania, has injured some 20 students. Here's what you need to know.