Army Specialist Ivan Lopez, 34, has been revealed as the shooter behind the deadly rampage on April 2 at Fort Hood — the same Texas base where 13 people died in a previous massacre in 2009.

When the bullets stopped flying after 20 minutes of horror, four people were dead, including Lopez, with 16 more wounded — all military personnel. Despite initial fears of a second shooter, it’s confirmed that Lopez acted alone, though his motives remain unclear. The Austin-Statesman reports that Lopez bought the .45 Smith & Wesson handgun used in this attack at the same store where Nidal Hassan bought the weapon he used in the 2009 attack on Fort Hood.

Here’s what you should know about the man behind this American tragedy:

1. He Was an Iraq Vet Who Suffered From Depression & Anxiety

Lopez was an active member of the military, enlisting in 2008 with the army as an infantry soldier, later becoming a truck driver. He was wearing Army fatigues during the attack. Lopez served in the Army National Guard in Puerto Rico, according to NBC News. The network also states that Lopez served one tour of four months in Iraq after leaving the national guard for the U.S. Army in 2010. A later report from NBC News said that military sources told them that Lopez did not see any combat during his tour of duty in 2011.

An Associated Press report quotes Lt. Col Ruth Diaz saying that Lopez was on a peace and security meeting to Egypt’s Sinai Peninsula during the mid-2000s.

Lt Gen. Mark A. Milley told the media that Lopez was undergoing treatment for PTSD, depression and anxiety. He was not wounded in action but did self-report a brain injury since returning from Iraq. Army Secretary John McHugh told a Senate committee that there were was nothing in Lopez’s latest psychiatric evaluation that indicated homicidal or suicidal tendencies.

There are reports that Lopez may have been working in building 33026, a medical building, where the shooting began. The father of one of the wounded told WLBT that Lopez opened fire after being denied a leave form. The gun used in the attack is said to be a .45 pistol. A defensive official reportedly told Reuters that there is no indication the attack was terror related. Lopez did not have a prior criminal record. A Specialist is one of the lowest ranks in the army. 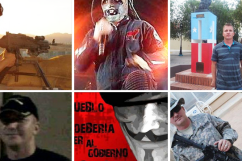 2. He Was a Husband & Father Who Lived Near Fort Hood

Lopez just moved to the Fort Hood area in February 2014. It had been reported since the incident began that it was “soldier-on-soldier” and “not terrorism related.” CBS DFW reported that “the shooting reportedly started as the result of a dispute between soldiers.”

Cops were seeking a Toyota Camry in relation to the shooting. The Camry is believed to have belonged to Lopez.

He was a married man with a daughter, and the family moved into an apartment in Killeen, Texas, near the the Fort Hood base, around three weeks ago. Lopez’s wife is said to be co-operating with authorities.

He also has two children from a previous relationship.

Speaking to KXAS, a woman believed to be Lopez’s wife refused to answer questions stating that she had just spent much of the night talking to police. The station quotes a neighbor, Xanderia Morris, calling the couple “real sweet.” When Lopez’s identity was made public, his wife ran out into the street screaming hysterically until she was comforted by Morris.

According to El Nuevo Dia in Puerto Rico, Lopez’s mother had just died of a heart attack. Just prior to her death, Lopez’s grandfather is also said to have died. The Mayor of Guaynilla, Puerto Rico, Edgardo Arlequín, says he knew Lopez has a boy and called him “quiet” with young parents who were “dedicated.” The two played in a school band together.

Lopez’s mother, Carmen Lopez, worked as a nurse Guaynilla, the shooting suspect’s sister still lives in Guaynilla as a music teacher. He attended high school in Guaynilla at Asuncion Rodriguez De Sala. Lopez may have been annoyed that the military only gave him 24 hours off to attend his mother’s funeral, according to a friend. The same friend said that he had spoken to Lopez only a few days ago. He added that Lopez was annoyed because he had been robbed recently. 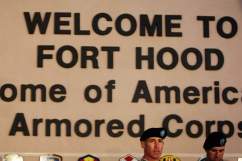 4. He Shot Himself in the Head After Being Cornered by a Female Officer

Lopez may have continued his murderous rampage if not for the heroics of a female officer, who cornered him and forced a confrontation.

Lopez apparently walked into a building Wednesday afternoon and began firing a [recently purchased] .45-caliber semi-automatic pistol. He then got into a vehicle and continued firing before entering another building, but he was eventually confronted by military police in a parking lot, according to Milley, senior officer on the base.

As he came within 20 feet of an officer, the gunman put his hands up but then reached under his jacket and pulled out his gun. The officer drew her own weapon, and the suspect put his gun to his head and pulled the trigger a final time, Milley said.

5. No More Fatalities Are Expected

Four people were killed in the attack, including the gunman, 16 in total were wounded. All of those killed and wounded were military personnel. Doctors at Scott & White Memorial Hospital told the media that they treated eight people, seven men and one woman. Three of those people were in critical condition and five were in serious condition. Four people treated at another hospital were released with minor injuries. A memorial is being planned for next week at Fort Hood.

Loading more stories
wpDiscuz
0
0
Would love your thoughts, please comment.x
()
x
| Reply
An Iraq veteran and father of three is behind the rampage that left four dead and 16 injured at Fort Hood. What made him snap?