Officials announced that six people were injured, three critically, in the shootings. (WSBTV)

A male suspect opened fire Tuesday morning at a FedEx plant in Kennesaw, Georgia, injuring six people before taking his own life.

The shooting happened at about 5:45 a.m., and police were searching for the suspect for about three hours before finding him dead of an apparent self-inflicted gunshot wound.

Here’s what you need to know about the developing situation:

1. The Suspect Had a Rifle, Knife & Bullets Strapped Across His Chest, ‘Like Rambo’

Liza Aiken, a clerk at the warehouse, told the Atlanta Journal Constitution:

I looked to my left. I saw him standing there and the knife was on the ground. He dropped his knife. He had an assault rifle. He had bullets strapped to his chest like Rambo. I mean he looked like he was heading into war. As soon as I saw him, I ran the other way. I ran and made sure that people upstairs were gone. He was in all black. I think he had a camo vest. He had an assault rifle and bullets strapped to his chest.

The Associated Press reports Aiken was talking to a reporter when a woman in a FedEx jacket told her to stop talking and pulled her away.

Watch raw video from the scene above from the Associated Press.

Six people were rushed to a local hospital, with injuries ranging from minor to very serious.

Doctor Michael Nitzken (pictured above) of WellStar Kennestone Hospital announced at an 11:30 a.m. news conference that three people were in critical condition, including two whose injuries are considered life-threatening.

The two victims with life-threatening injuries are a 28-year-old man and a 52-year-old woman, officials said. The victims’ names have not been released.

The victims all suffered multiple wounds from what appeared to be a shotgun.

Doctors benefitted from treated the patients during a shift change, meaning more personnel was on hand when the victims arrived.

3. The Shooter Apparently Shot Himself

Almost three hours after the shooting, police said they found the suspect dead, probably from a self-inflicted gunshot wound.

The suspect has not been identified, other than as an employee at the warehouse. Police are not searching for any additional suspects.

4. A Witness Says the Shooter Requested a Day Off, but Wasn’t Granted it

The FedEx facility is in Kennesaw, about 20 miles from Atlanta.

Collin Harrison, a 22-year-old employee at the warehouse, tells Mashable:

The last time I saw him it was Friday, and me and another employer were talking about him and how he requested to take off Saturday. But his manager told him no, he took off anyway, and he didn’t show up this morning. We thought maybe he just quit.

Harrison told Mashable he thinks the shooter’s name is Getty, but he’s not sure if that’s his real name or a nickname.

He described the chaotic scene at the warehouse as follows:

I’m loading my truck for maybe two hours when I hear this scream, like a woooooo. Then I hear this lady scream right after. It was really loud, so I look over to where the entrance is, and I don’t see anything, but then I hear managers over radios and they’re like, ‘Everybody get out of the building!’

5. Police Are Still at the Scene

Police are still on the scene, at 1675 Airport Road in Kennesaw (shown above via Google streetview). A K-9 unit and bomb squad were called in to run a precautionary search for explosives.

FedEx employees have been taken to the nearby Sparkles family fun center, where they were able to connect with loved ones and arrange rides home. 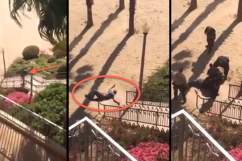 WATCH: Police in Long Beach Fatally Shooting a Man in the Back