Multiple people, including children, are injured when a car crashed through a KinderCare on 4035 Goldenrod Road in Orlando, reports WKMG.

1. There Were No Fatalities

A Dodge Durango ran another car off the road, sending it crashing through the day care injuring multiple children. Parents could be seen, some distraught, awaiting information from cops:

2. The Durango Driver Was Found by Cops

Cops were searching for the driver of the silver Durango who didn’t stop after the crash. He was eventually found at Orlando International Airport.

3. Some Kids Are Seriously Injured

Some of the injured are children, we don’t know if the dead person is a child or staff members. The Orange County Sheriff’s Department told Click Orlando that at least ten people have been transported to hospital.

4. The Day Care is Being Cleared

The day care was completely evacuated after the crash. The learning center is located at 4035 North Goldenroad in Winter Park, Orlando.

5. Firefighters Are Still Searching For Victims 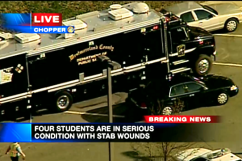 Loading more stories
wpDiscuz
0
0
Would love your thoughts, please comment.x
()
x
| Reply
A Dodge Durango ran another car off the road, sending it crashing through the day care killing one person and injuring multiple children.