Donald Sterling is under fire after TMZ Sports released a tape of a man identified as the Los Angeles Clippers owner spewing overtly racist comments in a conversation with his girlfriend — who happens to be part black and part Hispanic.

In the tape, the man identified as Sterling lambasts V. Stiviano, his much younger girlfriend, for posting photos on her Instagram page of her with other black people, including Los Angeles Lakers legend (and L.A. Dodgers co-owner) Magic Johnson.

Here is what you need to know about the tape, the fallout, and Sterling’s history of racism:

1. He Was Caught On Tape Telling His Girlfriend Not to Bring Minorities to Clippers Games

You can listen to the recording above. If you’re unable to click on the recording on your mobile device, click here for a mobile optimized version on the TMZ site.

Some of the most outrageous comments include:

It bothers me a lot that you want to broadcast that you’re associating with black people. Do you have to?

You can sleep with [black people]. You can bring them in, you can do whatever you want. The little I ask you is not to promote it on that … and not to bring them to my games.

Stiviano is identified as the defendant in a lawsuit filed last month by Sterling’s estranged wife, Roechelle Sterling, who accuses Stiviano of being a “gold digger” and is seeking to recover money and gifts she says her husband gave Stiviano with money jointly held by the couple.

Stiviano describes herself as a “Artist,Lover,Writer,Chef,Poet, Stylist, Philanthropist.”

3. He Was Called One of the Most Hated Sports Owners

In 2013, Real Clear Sports came out with a list of the 10 most despised sports team owners and, unsurprisingly, Sterling was ranked first. The publication cited Sterling’s frugality and unwillingness to spend money on employees, and his overt racism as reasons that make him so widely loathed.

He also has been heard heckling his own players, and refused to pay for former Clippers coach Kim Hughes’ prostate cancer surgery if it was outside the company’s network.

Sterling, who has owned the Clippers since 1981 and is the longest tenured owner in the NBA, has also presided over one of the least successful franchises in professional sports history.

4. Sterling’s Status as an Owner Is in Doubt

Amid intense backlash from players, coaches and fans, NBA commissioner Adam Silver said Saturday that the NBA is investigating the comments and will move swiftly with some kind of action.

Clippers coach Doc Rivers, who is black, has spoken out against the comments, as have an array of players including LeBron James, who said Saturday he thinks there’s no place for Sterling as an NBA owner.

The Clippers took part in a silent protest against Sterling before their playoff game Sunday against the Golden State Warriors, throwing their Clippers warmup shirts onto the floor at center court before the game and warming up wearing inside-out shooting shirts to hide the team’s logo.

Rivers, who the Clippers lured away from the Boston Celtics before the 2012-13 season, told ESPN Sunday he’s not sure what it will take to get him to return for a third season in light of Sterling’s comments.

Some of the most articulate criticism came from Charles Barkley, who urged Silver to take swift action Saturday during TNT’s NBA playoff coverage. Watch the video above of Barkley, host Ernie Johnson and analysts Shaquille O’Neal and Kenny Smith discussing the comments.

Even President Obama, who was speaking Sunday at a press conference in Malaysia, weighed in on Sterling’s remarks, telling reporters that “when ignorant folks want to advertise their ignorance, you don’t really have to say anything, you just let them talk,” according to CNN.

5. Sterling Has Been Accused of Discrimination in the Past

In 2005, Sterling paid a settlement of $2.73 million to settle claims with the State Department and employees over the allegations that he was discriminating against minorities and employees with families during hiring.

Ironically, according to USA Today, Sterling had been scheduled to receive a lifetime achievement award next month from the Los Angeles chapter of the NAACP. 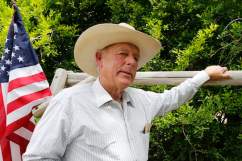 Loading more stories
wpDiscuz
0
0
Would love your thoughts, please comment.x
()
x
| Reply
Donald Sterling, owner of the Los Angeles Clippers, is in trouble after a recording leaked of him saying very racist things to his girlfriend. Listen here.