Prince Charles walks with brother-in-law Mark Shand on November 12, 2013, in the elephant corridor of the Vazhachal Forest Range. Shand was a conservationist and travel writer. (Getty)

Mark Shand — the younger brother of Camilla Parker-Bowles and the brother-in-law of Prince Charles — has died after reportedly slipping and hitting his head while smoking a cigarette.

Here’s what you need to know about Shand and his tragic demise.

Stay tuned for many more details on this breaking story.

1. He Died After a Head Injury

According to an official statement from Clarence House, Shand, 62, died today in a New York hospital “as a result of a serious head injury which he sustained during a fall last night.”

He was reportedly attending a charity fundraiser at the Diamond Horseshoe club at the Paramount Hotel on West 46th Street in Manhattan.

2. His Sister Is Camilla, Duchess of Cornwall

Although he is best known as Camilla, the Duchess of Cornwall’s brother, and the brother-in-law of Charles, Prince of Wales, Shand also has his own royal connections. Shand’s Maternal grandfather as Roland Calvert Cubitt, the 3rd Baron of Ashcombe.

3. He’s a Travel Writer and Conservationist Who Published 2 Books

Shand was the author of several books, most notably Travels on My Elephant/a> and River Dog: A Journey Down the Brahmaputra. Both books chronicle Shand’s affection for animals.

above you can hear him discuss his love of elephants and his activism.

Prince Charles, Prince of Wales views some decorated elephant sculptures at the Royal Hospital, London during a reception to celebrate the 70th Anniversary of the formation of the Airborne Forces in his role as Colonel-in-Chief of The Parachute Regiment on June 24, 2010 in London, United Kingdom. The sculptures are to be auctioned to raise money to save the endangered Asian elephant, a project championed by the Prince’s Brother-in-Law, Mark Shand (right) brother of the Duchess of Cornwall. (Getty)

The Elephant Family foundation works with partnering NGOS across the continent of Asia to help protect elephant habitats.

5. He’s Survived by an Ex-Wife and Daughter

Shand is survived by his ex-wife, French actress Clio Goldmisth, and their 19-year-old daughter Ayesha Shand. 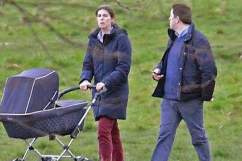