Mohammed Pedro Whitaker is the suspect in a slew of highway shootings in and around Kansas City, Missouri that terrorized communities in two states. After weeks of searching for for the suspect, cops arrested Whitaker Thursday and charged him with 18 felonies.

Prosecutors and other local officials announced the arrest Friday in a jubilant mid-afternoon news conference. (Watch video of the news conference above from NBC 41 Action News.)

Authorities say the 27-year-old Whitaker was firing at seemingly random cars in Missouri and Kansas between March 18 and April 6.

Here’s what you need to know about Whitaker:

1. He’s Charged With 18 Felonies in 9 Incidents

Officials announced at Friday’s news conference that Whitaker was being held in lieu of $1 million cash-only bond. He is charged with 18 felonies, including two Class A felonies for shooting into occupied cars. The Kansas City Star posted the probable cause document, which you can read above.

2.Tips From Victims and Other Witnesses Led to Whitaker’s Capture

Cops received more than 100 leads from victims and witnesses, several of whom described the green Dodge Neon that cops say Whitaker was driving.

One of the victims reported being shot in the leg while driving on Interstate 70. Another reported that a bullet had pierced the car she was driving, not far from where her daughter was sitting in the back seat.

The probable cause report, written by Kansas City Police Detective Dawn McCamish, says cops began to watch Whitaker’s car and realized that he was often driving erratically and pacing cars in their blindspots.

3. Whitaker Is a Kansas City Resident

Whitaker is a Kansas City resident a 2004 graduate of Moberly High School. Police said he had worked in Kansas City but was on administrative leave at the time of his arrest. The Kansas City Star reports that Whitaker worked at OptumRx, a division of UnitedHealth Group that fills prescriptions, in Overland Park, Kansas.

The highways shootings came less than a week after three people were fatally shot at Jewish centers in nearby Overland Park, Kansas. A notorious white supremacist has been charged in those slayings and could face the death penalty. But officials said at Friday’s news conference that the two sets of events don’t appear to be connected in any way. (Click above to read the full criminal complaint, posted by the Star.)

Whitaker's father tells me the last time he spoke with his son was on April 7th #KCHighwayShooting @41ActionNews pic.twitter.com/YiAhyqhzCA

Edward Whitaker, the suspect’s father, told Fox 4 KC that his son is “not the highway shooter.” He also told 41 Action News’ Mitch Weber that if Mohammed Whitaker is the shooter, he must not have acted alone.

Edward Whitaker also talked to the Star, and to Mitch Weber of 41 Action News. He told local reporters that he last talked to his son April 7.

Police said the green Dodge Neon Whitaker was driving had Illinois license plates and was registered to Edward Whitaker. The elder Whitaker told the Star that he bought the license plates for a white Buick that he gave to his son. He told the paper that Mohammed Whitaker must have transferred the plates to the Neon. 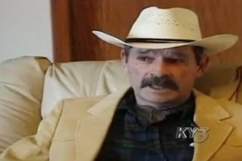