Lacey Holsworth, the 8-year-old cancer patient who forged a deep bond with the Michigan State basketball team, has died.

Here’s what you need to know about her inspirational story:

1. Her Family Announced Her Passing on Her Instagram Page

Her family made the following announcement, along with this adorable picture of Lacey blowing a kiss:

Princess Lacey has achieved the ultimate victory. She now dances among angels…. The world is a better place because you were in it. Our hearts are broken. We love you Doll. Dance all night… Mommy and Daddy, Will, Mitchell, and Luke #LoveLikeLacey

2. She was a Huge Michigan State Basketball Fan

Lacey had a special connection with the Michigan State basketball team — especially with star forward Adreian Payne. This Instagram post features her NCAA Tournament bracket, in which she picked Payne’s Spartans to beat Big Ten rival Wisconsin in the national championship game.

According to MLive.com, Lacey was seen in the stands at the college slam dunk contest April 3 watching Payne compete.

Coach Tom Izzo, a college basketball legend who has coached the Spartans for more than two decades, delivered a tear-jerking tribute to Lacey, included in the video above.

With Lacey by his side at the podium, Izzo thanked Payne for teaching him a valuable lesson about being there for people.

Izzo then handed Lacey a framed photo before turning the podium over to Payne and Lacey. The video also includes a montage of images of Lacey throughout the season, and testimony from Michigan State players.

4. Lacey Cut Down The Net After MSU Won The Big Ten championship

Michigan State beat rival Michigan to win the conference championship, and Lacey cut down the net during the celebration.

Here she is celebrating with the team and coach Tom Izzo.

5. There’s an Outpouring of Love for Her on Social Media

Michigan State guard Gary Harris is just one of hundreds of people who took to Twitter this morning to mourn Lacey’s death.

Wow i dont even wanna believe it @adorablelacey 's family is in my prayers. I know she will be watching over us all #RIPLACEY

RIP to such a beautiful little girl 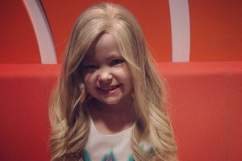