Rita Jeptoo of Kenya is the Boston Marathon winner for the third time.

1. She Set a Course Record

Jeptoo set a course record in 2:18:57, beating second-place finisher Buzenesh Deba by about a minute and beating the 12-year-old course record set by Margaret Okayo of Kenya by almost two minutes.

Jeptoo after winning the marathon in 2006. (Getty)

3. She Took More Than 2 Years Off After Having a Child

Jeptoo gave birth to her first child in 2008 and took more than two years off from running afterward, not returning to running until 2011. She went without a marathon win in 2011 and 2012 after returning from maternity leave.

This year, she was able to enjoy her victory a whole lot more.

5. She Came From Behind

Jeptoo trailed American Shalane Flanagan for more than half the race and was competing against a pack of other challengers until the race’s 23rd mile. 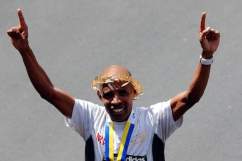 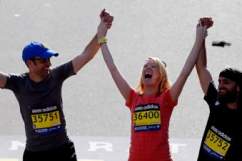 Boston Marathon 2014 Results: The Winners & Times You Need to Know