Sewol, a South Korean ferry heading from the port city of Incheon carrying 462 people, sank at around 9 a.m. local time. Investigators are now working through the night to try to recover the up-to 300 people still missing from the flooded 6,800-ton ferry boat.

CNN confirms that a female and three males have been confirmed dead, but that that number is expected to rise as around 300 people are still missing. AP now reports that 55 people are confirmed injured.

The rescue operation of almost 80 boats and 18 aircraft have been scouring the Yellow Sea and the submerged cabins of the boat as they search for survivors. Estimates by CNN show that as of 9 a.m. E.S.T, around 160 people have been rescued.

Above you can watch the video of a dramatic rescue from the overturned boat.

At 9:28 a.m. EST, the United States Navy announced that it would be sending the amphibious assault ship the USS Bonhomme Richard to the site of the capsized ferry. The s hip was deployed to Sasebo, Japan with the U.S. 7th Fleet. Captain Heidi Agle of Amphibious Squadron 11 said, “When we were alerted to the accident, we immediately diverted to the scene to render assistance. However, the efficiency of the Korean response eclipsed the immediate need for our assets. We are standing by to provide support as requested by the on-scene commander.” 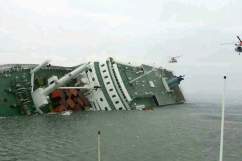 South Korea Ferry Capsizes With 459 Aboard: The Photos You Need to See

3. There Were 324 Students On Board Headed to a Field Trip

Among those close to 500 people traveling on the ferry were 324 high school students and 14 teachers from Seoul’s Ansan Danwon High School. They group left port at Incheon and, according to CNN, were headed to the resort island of Jeju.

4. The First Distress Call Went Out at around 9 a.m. Local Time

According to Bloomberg, the ship sank 12 miles from Byeongpoong island after the coast guard received the first distress call at around 8:58 a.m. local time.

Authorities claim that it is too soon to know the cause of the tragedy or what caused the boat to capsize. The ship seemed to be running fine, with the exception of a two-hour delay in leaving Incheon yesterday due to fog, according to Bloomberg.

South Korea Ferry Capsizes With 459 Aboard: The Photos You Need to See

Read More
Breaking News, South Korea, Tragedy
wpDiscuz
0
0
Would love your thoughts, please comment.x
()
x
| Reply
Sewol, a South Korean ferry, sank in the Yellow Sea. Now, up to 300 people are still missing and many are confirmed dead in the capsized ship.