As more details continue to emerge from the tragic shooting at the military base Fort Hood in Texas, a more vivid picture of the victims begins to emerge. One of the latest of the three dead to be identified is 38-year-old Carlos Lazaney.

Here is what you need to know about his life, and the tragedy that ended it:

1. He Was Shot By Ivan Lopez

At around 4:00 p.m. local time, a man identified as 34-year-old Ivan Lopez began open firing inside a building at Fort Hood with his recently-purchased .45-caliber semi-automatic Smith & Wesson pistol. Although the specifics of how Lazaney was killed, many who were shot were those attempting to confront or reason with the shooter.

According to Lazaney’s family, the 38-year-old joined the military at the age of 18 and served around the U.S. for 20 years. Many fellow soldiers remember Lazaney as being a welcoming and supporting figure in the sometimes-isolating world of the army. Joshua Adams, who served as a military police alongside Lazaney, told the Star Advertiser, “He’s one of the most genuine people in the Army that I knew. He was very down-to-earth. He understood people.”

His family say he was planning to retire from the military at the end of the year.

3. He Served in Hawaii

During his 20-year career in the military, Lazaney served at Schofield Barracks in Honolulu, Hawaii. There he served as a supply sergeant in the 57th Military Police company, and at 728th Military Police Battalion.

Carlos Lazaney was born in Aguadilla, Puerto Rico, and his death was confirmed by Puerto Rican news outlets and the Mayor of Agudailla. Like one of his victims, the alleged shooter Ivan Lopez, also hailed from Puerto Rico. Lopez was born in Guayanilla along the southern coast of the island and served briefly in Puerto Rico’s national guard. Currently, around 10,000 people from Puerto Rico serve in the U.S. military.

5. Four People, Including Lazaney & the Shooter, Were Killed on Wednesday

Lazaney was one of the three victims now deceased after a rampage that ended in the alleged shooter, Ivan Lopez, also turning the gun on himself. The other two victims were Sgt. 1st Class Danny Ferguson, 39, and Sgt. Timothy Owens, 37. 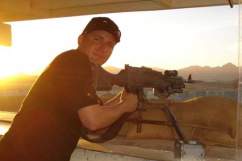