Tupelo, Mississippi, home to 35,000 residents, suffered a direct hit this afternoon from a violent weather system. It’s the latest community rocked by the deadly tornadoes that have been terrorizing the South and Plains regions since Sunday.

Here’s what we know so far about this breaking story.

Winds were reported up to 170 mph, with the Tupelo tornado estimated to be 1 mile wide.

It was first spotted by storm chasers at 2:43 p.m. local time.

According to the Weather Channel, “around 2:50 the tornado reportedly crossed through the intersection of US-45 and US-78 through the northern limits of Tupelo.”

WTVA TV was forced to evacuate mid-broadcast as the tornado approached, resulting in the harrowing video seen above.

3. Photos Have Emerged of Devastating Damage

MAJOR damage in North Tupelo. This is serious guys! pic.twitter.com/QepqUO5ydp

Don Lewis, the city’s chief operations officer, tells the Clarion Ledger that there is damage to houses and cars in the northern part of the city.

Several tractor-trailers were blown off the highway, reports the Memphis NBC affiliate.

BEFORE AND AFTER: #Tornado damage at Shell Station in #Tupelo, #Mississippi #mswx pic.twitter.com/uvv2021DcX 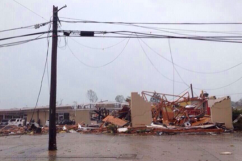 Tupelo Tornado 2014: The Photos You Need to See

4. One Person is Dead

Local journalist Robbie Ward is on the ground in Mississippi and weathered the storm “huddled” in a shopping mall.

There is one confirmed death so far, reports WMC-TV. The victim is reported to have been driving a car that was blown off the road in Verona close to Tupelo.

5. One of the Worst Tornadoes in History Struck Tupelo

In 1936, Tupelo was struck by a tornado that is known as one of the worst in American history. It killed 216 people and injured some 700.

Elvis Presley, then a baby, was among the survivors.

Tupelo Tornado 2014: The Photos You Need to See