Wow, wouldn’t you love to be there? The atmosphere seems pretty electric at the Final Four game between UConn and Florida. The second half has just started in the game and it’s 31-22 to UConn. 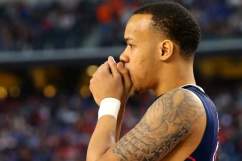