6. Sterling Asked Stiviano How to ‘Make This Go Away’

TMZ reported that Sterling, feeling battered by the national shame and ridicule brought on by his comments, called Stiviano and asked her how the two could make the story go away.

The site also reports that Stiviano is in possession of more than 100 hours of recordings, leaving open the possibility that there are many more damaging clips yet to be released.

Just about everyone under the sun had something bad to say over the last few days about Sterling, who has become Public Enemy No. 1 in professional sports and one of the most hated men in America.

But it’s hard to beat the comments made in a video posted by Snoop Dogg, who called the racist Clippers owner a “white bread, chicken s*** motherf***er” and added in a few other F-bombs for good measure. Click above to watch the video. (Warning: It’s extremely NSFW.)

8. The Sterlings Paid $2.7 Million in a Racial Discrimination Lawsuit

A 2003 District Court document outlining the case of the Housing Rights Center versus Donald Sterling Corp. alleges that Shelly would pose as a health inspector and use that bogus authority to record tenants’ ethnicities.

Shelly is also named in a 2006 lawsuit by the United States government against Donald and Shelly, in which the government claimed:

Defendants Donald Sterling, Rochelle Sterling, and their agents and/or employees have engaged in a pattern or practice of discrimination on the basis of race, national origin, and familial status in connection with the rental of dwellings owned by the Korean Land Company, the Sterling Family Trust, and Donald and Rochelle Sterling, in violation of the Fair Housing Act.

Read the document below:

That suit was settled in 2009 for $2.7 million, with the Sterlings maintaining that they were guilty of no wrongdoing.

9. Major Sponsors Are Fleeing the Clippers

The outrage over Sterling’s comments led to a mass exodus Monday of major corporate sponsors for the Clippers.

Among those fleeing were State Farm Insurance, the Virgin America airline, Mercedes-Benz and Kia. The terms of the Clippers’ deals with the corporate giants are not public, so it’s not clear how much money Sterling’s organization stands to loose. But it’s clear Sterling has become poison to any business relationship.

AdAge’s Michael McCarhty points out that the loss of Mercedes-Benz is likely particularly painful for Sterling:

With dealerships across Beverly Hills and other swanky Southern California locales, Mercedes is one of the Clippers’ biggest, most high-profile sponsors. Given Mr. Sterling’s alleged disdain for lower and middle-class fans, Mercedes is probably the kind of sponsor the billionaire owner covets.

10. The Clippers Have a Home Playoff Game Tuesday Night

The Sterling controversy has created a complicated dynamic for Clippers players, coaches and fans, who want the team to succeed but Sterling to fail.

The team lost its first playoff game since Sterling’s comments were made public Sunday at Golden State. But with the Clippers first-round playoff series against the Warriors tied at two games apiece, the series shifts back to the Staples Center in L.A. Tuesday night.

Rivers (pictured above) issued a lengthy statement Monday imploring fans to pack the arena and continue to support the players in spite of their disgust for Sterling:

We want to make the right decisions here. We’re doing our very best to try and do that. We know that fans are in a dilemma as well. We want them to cheer for their players and their team. It will always be their players and their team. From the fans that I have heard from, that’s how they feel. ‘This is my team. These are my players that I’m cheering for and that’s not going to change.’ I hope STAPLES Center is packed and people are cheering for the players. The players are now in the middle of this, and they have to deal with it. 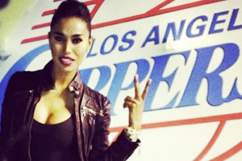 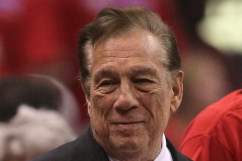