Cliven Bundy, the 68-year-old tax-denying Nevada rancher, made headlines again this week after a New York Times profile quoted him saying that “the Negro” sit on their porches because they “never learned how to pick cotton.” Making the full speech in front of his supporters Bundy said:

I want to tell you one more thing I know about the Negro..and in front of that government house the door was usually open and the older people and the kids– and there is always at least a half a dozen people sitting on the porch – they didn’t have anything to do. They didn’t have nothing for their kids to do. They didn’t have nothing for their young girls to do. And because they were basically on government subsidy, so now what do they do? They abort their young children, they put their young men in jail, because they never learned how to pick cotton. And I’ve often wondered, are they better off as slaves, picking cotton and having a family life and doing things, or are they better off under government subsidy? They didn’t get no more freedom. They got less freedom.

After the video went viral, Bundy gave interviews on a number of news outlets in hopes of clearing his name. Watch the CNN interview below and see how Bundy is only digging himself deeper into the racist hole. 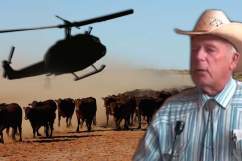