A tornado is bearing down on the town of Yazoo City, Mississippi, reports MS News Now.

1. Yazoo is Bracing For Impact

Residents of the town are urged to take shelter. The Clarion-Ledger reports that 100 miles per hour winds in the area.

2. Warnings Are in Affect Across 6 Different Counties

There is a tornado warning in affect for Yazoo, Madison, Attala, Holmes, Lee, and Pontonoc Counties. Schools in the area were closed early as people braced for impact.

3. The Storm is Described as ‘Violent’

The storm is also carrying “baseball” sized hail. This is part of the same weather system that killed people in Arkansas on April 26.

Yazoo City Was Struck by Major Tornadoes in 2010. Twice in 2010, on April 24 and November 29, major tornadoes struck Yazoo City. The April 24 tornado, a powerful EF4, killed four people and injured many more. The November tornado was less powerful but caused major damage.

5. Damage May be Limited

There are no reports of any major damage or injuries in the area at this time. 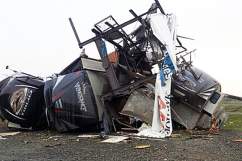