A recent video of Buffalo fleeing Yellowstone National Park in Wyoming, followed by a large earthquake, has piqued the public’s fear that a super volcano eruption may be imminent. Although park officials have tried to dissuade concern, articles appearing daily continue to speculate as to whether the giant supervolcano may erupt.

1. Animals Are Fleeing the Park

The video above depicts Buffalo running “for their lives” along the highway away from Yellowstone. Generally before events like volcano eruptions animals flee an area, but this video was also taken 10 days before an earthquake. That being said, animals are not especially known for fleeing before earthquakes.

On March 30, a 4.8-magnitude earthquake rocked Yellowstone, but did not leave any considerable damage. Earthquakes are connected to volcanoes in many ways, as both reside along the gap in tectonic plates, and earthquakes have been known to coincide with volcanic eruptions. Looking at the chart above from the United States Geological Society, one can see a a recent upswing in earthquakes.

The March 30 earthquake was the largest in Yellowstone in 30 years.

3. Yellowstone Sits Atop a Super-Volcano

Yellowstone sits above a super-volcano or caldera. The Yellowstone Caldera is estimated to be about 34 to 45 miles long and has erupted only three times in the last 2.3 million years, the most recent of which was about 640,000 years ago. However, the first eruption was estimated to be its most destructive, covering half of North America in ash. Reuters reports that evidence of creatures dying due to the eruption was found as far away as Nebraska.

Although many people have attempted to claim over the years that because the volcano tends to erupt every 700,000 or so, that the volcano is “overdue” for an eruption, this is not the case. The USGS says that the intervals between the previous eruptions are meaningless, but that does not mean that it won’t happen in future.

After concerns of a super-eruption swept across the Internet, the park responded with the video above. In it, park Public Affairs Chief Al Nash attempts to reassure the public by reminding us that animal migration and earthquakes are normal. The park receives around 1,000 to 3,000 quakes a year, granted not as large as the one on March 30. Also, Nash claims the reason bison and elk have been leaving the park due to the scarcity of food in the park during the winter months.

5. An Eruption Would Cover the Park in Lava

Above you can see a scenario of what would happen if the volcano erupted. 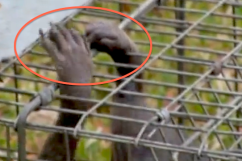 Chupacabra Found in Texas? You Be the Judge

Loading more stories
wpDiscuz
1
0
Would love your thoughts, please comment.x
()
x
| Reply
Videos of animals fleeing Yellowstone National Park and a powerful earthquake sparked fears that the super-volcano beneath the park may soon erupt. Will it?