Aaron Golub, a graduating senior from Newton South High School in Newton, Massachusetts, will start his freshman year at Tulane University in New Orleans as a preferred walk-on for their football team. An impressive achievement on its own, but what makes Golub’s story even more impressive is the fact that he’s legally blind.

Here’s what you need to know about Golub:

Golub is legally blind in his right eye and has limited vision in his left eye. According to the New Orleans Times-Picayune and the Tulane athletic communication department, Golub has been playing football since the seventh grade but didn’t decide he wanted to play college football until his sophomore year of high school.

2. Golub Is a Long Snapper

Golub is a trained long snapper, meaning his responsibility on the gridiron is to hike the ball as quickly and accurately as possible during punts, field goals and attempts for extra points.

3. Golub’s Trainer Is a Long-Snapping ‘Guru’

Aaron Golub trained with Chris Rubio, whom The New York Times called called the “guru of the long snap” in an article from August 2013. Rubio told Golub’s story in a post on his blog, saying how proud he was of Golub’s ability to turn himself into a Division 1 snapper in just two years.

According to the New Orleans Times-Picayune, Golub recognizes he’s a role model but isn’t a fan of the spotlight. The Times-Picayune reports:

I like to think of myself as just another one of the guys. I know some people may see me as a role model and I’ve already accepted that. Personally, I don’t like all the attention that goes with this story but a lot of people have wanted me to talk about it.

Golub and the rest of his class will graduate from Newton South High School on Monday, June 9. 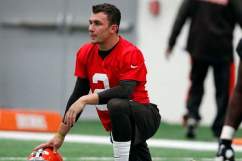