It’s been just over a year since Edward Snowden, a former NSA contractor, released a slew of documents to journalists revealing invasive and arguably unconstitutional programs carried out by the National Security Agency and other countries’ intelligence agencies. After online question-and-answer sessions, a few foreign press interviews and a number of speeches made over video chat, it was announced today that Snowden will grant his first interview on American mainstream media.

The interview will be hosted by Brian Williams and televised on NBC.

1. Brian Williams Taped the Interview in Moscow This Week

According to NBC News, Nightly News anchor Brian Williams traveled to Moscow this week for an “exclusive, wide-ranging” interview with the former NSA contractor and Booze Allen employee.

The interview was reportedly conducted over the course of several hours and required secrecy and discretion due to the Snowden’s tenuous position in Russia and his standing in the United States.

NBC has announced that the interview will run as a one-hour segment at 10 p.m. Eastern time on Wednesday, May 28.

In July 2013, just over a month after the initial leaks, Brian Williams appeared on The Late Show with David Letterman. There he discussed Snowden and the NSA and voiced a few telling opinions. Although Williams attempts to take a balanced and non-committal stance on the released NSA programs, he told Letterman about the dangers the NSA reportedly protects us from:

I was shared once a page of what’s called chatter, part of the intelligence the president wakes up in the morning and sees, and it would scare you to death. On an average day, the sweep they make over night of the talk, of the chatter, intercepted, submarines off coast, satellites up above, listening stations on the ground, it would curl your hair.

You can watch that conversation above.

4. It Will Be Snowden’s First Interview on Mainstream American Media

Snowden has made media appearances in countries like the UK and Germany, he’s done live Internet Q&A segments, but he has yet to do an interview that can be viewed by the American public on network television.

That is, until now.

Snowden’s new interest in American network television may signal an attempt on the part of the 30-year-old to regain positive U.S. public opinion. A recent poll by Huffington Post and YouGov revealed that only 31 percent of Americans think leaking was the right thing to do, 33 percent believe the leaks were wrong, and 36 percent say they’re not sure. The numbers conflict, however, with the 53 percent of Americans who believe Americans have the right to know about the surveillance programs.

5. Snowden May Be Attempting to Return to the U.S.

The reason behind Snowden’s new appeal to the American public may be a desire to come home. Recently it was reported that he had retained an attorney who specializes in the United States Espionage Act, the law that Snowden would be tried under should he return to the U.S. 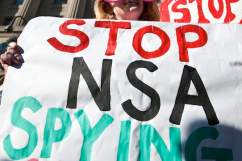