Craig Robinson, the college basketball coach who’s better known as First Lady Michelle Obama’s brother, is out of a job.

Sports Illustrated reported Monday morning that Robinson, a former star player at Princeton who later served as the head coach at Brown, was fired Sunday night as head coach at Oregon State.

Robinson had four losing seasons during his six years at Oregon State, failing to make the NCAA tournament or the NIT. The Beavers were in the postseason four times, but each time it was in the low-level College Basketball Invitational, in which teams willingness to pay the tournament organizers to host a home game is more of a factor in earning a bid than having a good record.

2. The Timing of the Firing Was Unusual

As SI’s Pete Thamel points out, the timing of Robinson’s ouster is unusual given that the Beavers’ season has been over for six weeks. Thamel reports that Robinson had been given signs of support from the Oregon State administration.

CBS Sports’ Gary Parrish has a good summary of the situation:

Evidence that the decision is a surprise is rooted in the facts that Robinson and his staff were out recruiting as they normally would as recently as last week, and that Maryland transfer Nick Faust committed to the Beavers just five days ago. On the other hand, since the end of the season, Eric Moreland has turned pro, Hallice Cooke announced his intentions to transfer, and Challe Barton made the decision to explore professional opportunities overseas, all of which left Oregon State with zero returning starters for next season.

Oregon State has had some success under Robinson, winning 21 games in 2011-12 and finishing a respectable 7-11 in the Pac-12. But the Beavers have finished 12th and 10th in the conference, respectively, in the last two years, when they’ve gone a combined 30-34. They lost to Radford last year in the first round of the CBI.

The coach even sported an orange tie and yelled “Go Beavers” when he introduced Michelle Obama at the 2008 Democratic National Convention in Denver.

My sister had grown up hearing my father and me talk about how to judge a person’s character by what type of sportsman they are, so she asked me to take Barack to play basketball. If you’re looking for a political analysis based on his playing, here it is: he’s confident but not cocky, he’ll take the shot if he’s open, he’s a team player who improves the people around him, and he won’t back down from any challenge.

Hat tip to the Denver Post for the text of Robinson’s speech. You can read the full text here.

4. The Program Was a Mess Prior to his Arrival

Under Robinson’s successor, Jay John (pictured above), the Beavers went a combined 72-97 overall and a putrid 28-68 in the Pac-10, finishing in eighth place or lower in four of John’s last five seasons.

5. Oregon State Has its Work Cut Out

If you are Ben Howland, you can't be picky. Take the Oregon State job and do what you did at Pittsburgh. Rebuild a program.

@GoodmanESPN @franfraschilla no way Ben takes that job. It is a graveyard. I think he can be picky for at least another cycle.

The Beavers have their work cut out for them in finding a new coach, given that many of the top names on the market have been snatched up.

That makes it even more puzzling that OSU didn’t part ways with Robinson after the season, which is what many in the local media expected to happen at the time.

As OregonLive’s John Canzano reports, Robinson even told reporters after the Beavers’ season-ending loss to Radford: “If I get fired, it’s been nice knowing you guys.”

ESPN’s Fran Fraschilla threw out the name of former UCLA coach Ben Howland as a potential successor to Robinson. But as SI’s Seth Davis noted, it’s not exactly an enticing job given the way things have ended for John and Robinson. 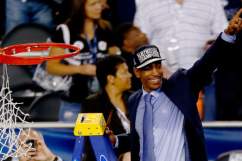