Curt Schilling and his son, Gehrig, at Fenway Park. (Getty)

The tweets were reacting to Schilling’s appearance at a reunion of the 2004 Red Sox World Series championship team. Schilling made a dramatic entrance from left field, walking in with his son, Gehrig, to join his teammates in the infield.

Twitter’s reaction to the ceremony was positive in general, but the Sox got a lot of flak for letting Manny Ramirez — a steroid user who quit on the team and was eventually traded to the Dodgers — throw out the first pitch, and for introducing Ramirez last, rather than Schilling.

Here’s a sample of the tweets, starting with a family photo tweeted by Schilling’s wife, Shonda.

Such a bitter sweet night for the schilling family to celebrate 2004 at Fenway tonight pic.twitter.com/smSA6Uendd

2004 reunion tonight was incredible. What a group of guys. And seeing Curt Schilling was inspiring. #toughasnails

Jason Varitek asked that on behalf of him and his teammates, that a shoutout go to Curt Schilling @gehrig38, who was The Man in ’04

Manny Ramirez gets the first pitch and the last intro instead of Curt Schilling at the Fenway celebration? 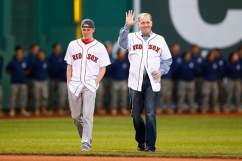 Loading more stories
wpDiscuz
0
0
Would love your thoughts, please comment.x
()
x
| Reply
Twitter was abuzz Wednesday with well wishes for Curt Schilling, the Red Sox legend who made his first public appearance since being diagnosed with cancer.