The 2014 Indy 500, the Super Bowl of racing, will be running its 98th race on Sunday May 25. If you’re going to be near a television set, the race will be aired on ABC with coverage starting at 11 a.m.

However, if you can’t get to a television set, never fear, you can watch the entire thing livestreaming online at ESPN 3.

The livestream coverage begins at 12 p.m. ET just before the 12:12 p.m. start time. On ESPN 3 you will also be able to switch to live streams directly from your favorite driver’s car. 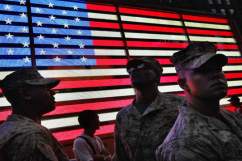 History of Memorial Day: 5 Fast Facts You Need to Know

Read More
Breaking News, Indy 500, Sports
wpDiscuz
0
0
Would love your thoughts, please comment.x
()
x
| Reply
Here is everything you need to know about how and where to watch the 2014 Indy 500.