The 98th Running of the Indianapolis 500 will take place at this Sunday, May 25, at noon Eastern time. The race will be broadcast live on ABC.

The Indianapolis 500 is considered the largest single-day sporting event in the world. As the oldest and most prestigious event in Indycar it is one of the richest cash prize funds in sports, with the total purse over $13 million, $2.5 million of it going to the winner.

The race has been held every year since 1911 at the Indianapolis Motor Speedway, which has the highest capacity of any sport facility in the world. The 200-lap race is run counterclockwise around the 2.5-mile track for a total distance of 500 miles.

The competitors drive single-seat, open cockpit, open-wheel, purpose-built race cars called “Indy cars.” The 33 Indy cars are lined up on the track with 11 rows, three cars per row. Practice and time trials are held within the two weeks leading up to the race.

Here’s what you need to know about the results, competitors, concerts and other important event information:

Ryan Hunter-Reay, driver of the #28 DHL Andretti Autosport Honda Dallara, kisses the bricks after winning the 98th running of the Indianapolis 500. (Getty)

The 2014 Indianapolis 500 first place trophy was clinched by American race car driver and first time winner, Ryan Hunter-Reay. Hunter-Reay went back and forth at the end with 3-time Indy 500 winner Helio Castroneves and teammate Marco Andretti, beating them out on the final lap of the race. Castroneves came in second by 6 one hundredths of a second, the second closest finish in Indy 500 history.

Tony Kanaan of Brazil, driver of the #10 Target Chip Ganassi Racing Chevrolet Dallara, sits by his car with his wife Lauren before the start of the 98th running of the Indianapolis 500. (Getty)

Kanaan lost his chance of becoming the first repeat Indy 500 winner since Helio Castoneves (2001-02) as soon as the first pit stop.

Kanaan’s No. 10 Dallara-Chevrolet was stuck at the first pit stop because of a battery problem, causing him to drop 18 laps off the pace. Kanaan will no longer be able to try winning the Indy 500 in consecutive years with different teams (he moved to Target Chip Ganassi Racing this season after leaving KV Racing Technology).

With 23 laps to go, drivers Ed Carpenter and James Hinchcliffe crashed into the right wall and spun out taking them out of the lead and the race itself. Ed Carpenter threw his hands up in frustration as his goal to win the Indy 500 was crushed once again. He told reporters how frustrating it was to have a car that could potentially win an then having it thrown away last minute because he was in the “wrong place at the wrong time.”

Carpenter has won the pole to the Indianapolis 500 for the second year in a row. He is the 11th driver in history to win back-to-back poles to the Indy 500 and the first since Castroneves did it in 2009-10. Although he dominates the qualifiers, Carpenter isn’t known for being successful in the race itself with just three Top 10 finishes in 11 attempts.

4. The Race was Red Flagged with 8 Laps to Go

With 8 laps to go, the red flag was waved. The field of competitors was stopped when Townsend Bell crashed his car causing a huge amount of debris to fill the track. In order for the competitors to finish the race the debris had to be cleared. Despite the messy crash, Bell walked away okay.

This year was the 50th anniversary of the first red flagged race. In the 1964 Indy 500, two drivers, Eddie Sachs and Dave McDonald, were killed on the first lap of the race. The race was restarted after a famous Eulogy was prepared for driver Eddie Sachs. After this, burning gas for the cars was outlawed as a result of the crash.

5. Kurt Busch Flew Immediately from IMS to Charlotte for the Coca Cola 600

Kurt Busch sits in his car in the garage area during practice for the NASCAR Sprint Cup Series Coca-Cola 600. (Getty)

Kurt Busch finished in 6th place today at the Indy 500. In honor of Memorial Day weekend, Busch is attempting to pull off the “double” by racing in the Indy 500, and then going to Charlotte later tonnight to compete in NASCAR’s Coca-Cola 600 to total 1,100 miles of racing in one day.

No Driver has tried since Jeff Gordon in 2004. The NASCAR star will be dedicating the runs to help struggling troops and raise awareness about PTSD.

When I feel like I’m getting behind in the race or I need that drive from within, I’m gonna think of our military and all the freedom we enjoy as Americans comes from a lot of sacrifice.

Busch has a passion for providing aid for members of the U.S. military, which works out well because Busch is dating President of the Armed Forces Foundation, Patricia Driscoll, and together they have raised over $75 million for wounded service members and their families. Their work has been nationally recognized by Congress and senior military leadership.

Click here for more info on The Kurt Busch Project. 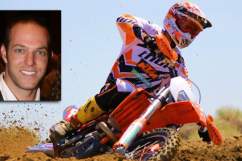 Loading more stories
wpDiscuz
5
0
Would love your thoughts, please comment.x
()
x
| Reply
The 98th Indianapolis 500 will take place this Sunday at the Indianapolis Motor Speedway. Here's what you need to know about the drivers, Carb Day and how to watch the race.