Eighteen-year-old James Wilson is the latest Manchester United striker to make a splash. The youngster scored twice on his debut for the Red Devils against Hull City in the EPL. Wilson was included in the side ahead of attackers Robin Van Persie and Juan Mata. For his debut, the youngster from Staffordshire wore Number 47.

1. Wilson is a Speedy Striker

Standing at just 5-feet-11 he’s more like Michael Owen than Robin Van Persie. But like Van Persie, he’s also known for his powerful left-foot. Give Me Sport also refers to his tireless work and he likes to put defenders under pressure. Despite being known primarily as a striker, Wilson is known to be equally talented as a winger.

2. Wilson Has Been Scoring For Fun This Season

He’s scored 19 goals so far this season for Manchester United’s Under-21s. His goals helped them get to the Under-21 final against Chelsea. His only previous action with the senior team was when he was named as an unused sub in the team’s 4-0 win over Newcastle.

Wilson signed for Manchester United from Biddulph High in Staffordshire, south of Manchester. He inked his professional contract on his 17th birthday in December 2012.

4. Wilson Has Played For England at Youth Level

He has represented England at Under-16 and 19 level. At Manchester United, he’s something of a prodigy. When he was just 15 he was already playing in the Under-18 team. On his official profile at ManUtd.com, it states that Wilson was first scouted by the Red Devils when he was just seven years old.

5. Wilson Isn’t the Only Making His Debut Against Hull

He made his debut at home against Hull City alongside fellow youngster, Tom Lawrence. 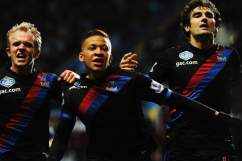