Jimmy Iovine, 61, is the world-famous and massively successful producer and entrepreneur who is about to get a heck of a lot richer. Iovine currently serves as the CEO of Beats By Dre, a popular headphones and audio company co-founded by him and Dr. Dre, the company Apple is currently in talks to buy for billions of dollars.

Here is what you need to know about the business man and mogul whose company is being snapped up:

1. He Is An Incredibly Successful Music & Film Producer

Before even teaming up with Dr. Dre to found the successful headphone company, Iovine was a successful music and film producer. He started as a recording engineer working with legends like John Lennon, Bruce Springsteen, and Meat Loaf.

In 1990, Iovine co-founded Interscope Records where he continued where he put out records by and gave careers to people like Eminem and Lady Gaga.

As a film producer he worked on movies like 8 Mile.

In 2006, Dr. Dre and Iovine founded Beats which made over $350 million in revenue in 2011. Early in the company’s history, a majority of it was owned by smartphone and electronic company HTC, who sold their share in 2013.

3. His Networth Was Estimated at $400 Million

It was revealed in the New York Times on Thursday that Apple was in talks to buy the company for $3.2 billion, making it the biggest Apple purchase in the history of the company. The acquisition includes Beats’ new streaming audio company which was introduced as a competitor to Spotify and Pandora.

5. He Once Criticized Apple’s Ear Buds

In the video above you can watch Iovine criticize what he calls Apple’s weakest component: Their headphones. Could his critique, great audio company, and Apple’s crappy ear buds be the reason behind the acquisition? 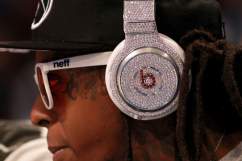 Apple in Talks to Buy Beats Headphones: 5 Fast Facts You Need to Know

Loading more stories
wpDiscuz
0
0
Would love your thoughts, please comment.x
()
x
| Reply
Jimmy Iovine is the CEO of Beats By Dr. Dre, a company that is potentially being purchased by Apple of $3.2 billion.