One of the burning questions in the NFL this week is “Where will Johnny Manziel go?” With the first round of the 2014 draft in New York City now over with, we can finally stop asking “Where will Johnny go?” He’s going to Cleveland to be a Brown.

So if you missed all of the hype over Manziel during the season, here’s what you need to know:

1. Manziel Won the Heisman Trophy After His First Season

He was recruited by Texas A&M from Tivy High School in Kerrville, Texas. Mr. Football made his debut in college ball in 2012 as a red shirt freshman. During his first season, he became the first freshman in NCAA history to pass for 3,000 yards and rush for 1,000 in a season. His efforts that season were rewarded with the Heisman Trophy. 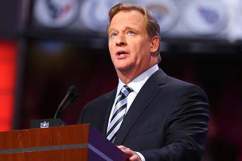 Here’s How to Watch the NFL Draft Live

His nickname of “Johnny Football” was given to him by the Texas A&M fans just before the 2012 season. Subsequently, it became a registered trademark. The QB set up a company, JMAN2 Enterprises, so that he could profit from the name indirectly. Under NCAA rules, players can’t directly profit from playing sports.

3. Before Making his College Debut, He Was Arrested

Manziel has had his fair share of problems. During the summer of 2012, before become Texas A&M’s starting QB, Mr. Football was arrested. While walking with a friend in College Station, Texas, late at night, Manziel and a friend became involved in an altercation with a man after Manziel’s friend allegedly directed a racial insult at the man. After some pushing-and-shoving, Manziel and his friend were taken into custody charged with disorderly conduct and presenting a fictitious driver’s license. Despite this, Manziel was still named starting quarter back for 2012. Due to coach Kevin Sumlin’s rules about freshmen giving interviews, Manziel was unable to talk to the media about the incident until 2013. Throughout 2013, his rowdy behavior off-the-field became a media sensation, even resulting in an ESPN Magazine article.

4. His Family Wants Him to Move From Texas

It’s looking like Manziel will be going to play for the Cleveland Browns next season. There are rumors that he isn’t too keen on the idea of being drafted to the Jaguars. According to Sports Illustrated, Manziel’s family really don’t want him playing in Houston next season. Something to do with potential distractions possibly making his transition even harder. At Paddy Power, Manziel is joined fourth favorite (with Greg Robinson) to go number one.

5. Everyone Wants to Know Who Johnny is Dating

Besides where Johnny’s getting drafted, the other big question is “Who is he dating?” In April 2014, he was pictured with a stunning brunette Kyndal Kyaire at a Texas Rangers game. In the past, Manziel was linked to Miss Coed 2014 Lauren Hanley. 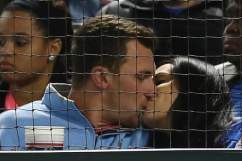 Who Is Johnny Manziel Dating? 5 Fast Facts You Need to Know