Between his history of misbehavior and long list of victories, Kurt Busch is getting a lot of buzz for this year’s Indianapolis 500.

In addition to racing in his first Indy 500, Busch also race in NASCAR’s Coca Cola 600 Sunday, tallying 1,100 miles as a dedication to U.S. Military Service Members.

Here’s what you need to know about this unruly competitor’s history and plans for this weekend:

1. His Career Began in Las Vegas

Busch was born on August 4, 1978 to Thomas and Gaye Busch in Las Vegas, Nevada. By the age of 6, Busch’s father was taking him to the track to drive go-carts by himself.

As a teenager, he won the second race he ever competed in at the Las Vegas Motor Speedway. He competed as a team with his father on western tracks from Southern California to Utah. Busch won 10 successive races at 10 different tracks in 1994, which was his first full year as a driver.

In 1996, at the age of 18, Busch raced in the Legends Series, driving a powerful car his father had bought. He lated attended the University of Arizona to earn a degree in Pharmacy. His brother, Kyle Busch, is also a professional driver.

Kurt Busch’s net worth is $25 million.

Kurt Busch sits in the indow of his car after qualifying for the NASCAR Sprint Cup Series Sprint All-Star Race at Charlotte Motor Speedway in Charlotte, North Carolina. (Getty)

Although Busch is a veteran driver, this year will be his first Indy 500. Busch has raced well in the Indy Series, starting in the 12th position on the Indianapolis Motor Speedway.

Sunday, he will join the list of drivers who have raced in both the Indy 500 and the Daytona 500.

3. He Will Attempt the ‘Double’ on Sunday to Raise Awareness for Wounded Warriors

In honor of Memorial Day weekend, Busch is attempting to pull off the “double” by racing in the Indy 500, and then going to Charlotte later at night to compete in NASCAR’s Coca-Cola 600 to total 1,100 miles of racing in one day.

No Driver has tried since Jeff Gordon in 2004. The NASCAR star will be dedicating the runs to help struggling troops and raise awareness about PTSD.

When I feel like I’m getting behind in the race or I need that drive from within, I’m gonna think of our military and all the freedom we enjoy as Americans comes from a lot of sacrifice.

Busch has a passion for providing aid for members of the U.S. military, which works out well because Busch is dating President of the Armed Forces Foundation, Patricia Driscoll, and together they have raised over $75 million for wounded service members and their families. Their work has been nationally recognized by Congress and senior military leadership.

Watch Busch’s interview with Sportscenter about The Kurt Busch Project.

Click here for more info on The Kurt Busch Project.

4. He Crashed His Car in the Practice Round

The 2004 NASCAR Nextel Cup champion completed 56 laps before losing control of his car after Turn 2 of practice on Monday at the Indianapolis Motor Speedway. The Andretti Autosport Honda along with the large group of cars he was driving against thwarted his attempt to correct the IndyCar. The right side of Busch’s car crashed into the outside wall, setting fire for a moment before spinning to a stop in the infield grass.

Busch was able to get out of the annihilated car on his own and was taken to the speedway’s care center for a mandatory examination. Fifteen minutes later, Busch was released and cleared to drive. Busch’s last lap before the crash clocked in at 223.433 mph. He will be using teammate Marco Andretti‘s backup car for the race on Sunday.

I was starting to feel comfortable. That’s when I made the mistake of just letting my guard down or settling into that ‘long run’-type mentality, whereas with an Indy car you have to be on edge. You have to keep track of where you are at all times and the adjustments in the car. Maybe I just didn’t keep up with keeping the car underneath me. You’re trying to get into that rhythm and feel other things around you, and I got behind on my adjustments in the car.

Watch this video of Busch’s crash during practice.

5. He Has a History of Misbehavior

Kurt Busch sprays team members with champagne after a victory in the Spring Series. (Getty)

Busch has been criticized in the past for a series of misconduct, including verbally abusing members of his team and the media, drunk driving, and a rocky end to his first marriage.

In 2011, he saw a sports psychologist for more than two months to work on his personal issues, according to interviews during the 2011 NASCAR Championship week.

Busch tried building his image up in order to join a major team by 2013, but fell short when he was accused again of being disrespectful and irresponsible.

That season, he was suspended for a week in June for verbally abusing a media member when he told the reporter that since he was already on probation (from doing a burnout through Ryan Newman’s pit box and endangering crew members), it was the only thing preventing him from

“beating the sh*t out of you right now because you ask me stupid questions.”

Busch left Roger Penske’s team at the end of 2011 after continuing with his bad behavior and an inability to work well with his teammates.

Kurt Busch shares a kiss with his now ex-wife, Eva Bryan, before they were separated in 2011. (Getty)

Busch married Eva Bryan on July 27, 2006, three years to the day of them meeting on a blind date. By June 30, 2011 they were separated, which he announced a few days after he was seen kissing another woman in victory lane. 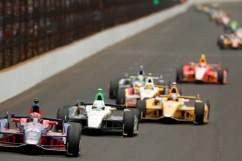