After seeing both Williams sisters, Caroline Wozniacki and reigning Australian Open women’s champion Li Na get knocked out of the 2014 French Open, the title has been opened up to unknown players on the rise, including American player Taylor Townsend. You may not have known who Townsend was going into the French Open, but her impressive performance thus far means you’ll learn more about her as the tournament progresses.

Here’s what you need to know about Townsend:

Townsend beat France’s No. 1 player and No. 20 seed in the French Open, Alizé Cornet in each of her final two sets on Cornet’s home turf, according to For The Win. You can watch some of the highlights from the match in the video above. The final score was 6-4, 4-6, 6-4. Townsend told ABC News of her win, “These are just the moments that I have been working for.”

How good is Taylor Townsend! #talent

And she has a great smile! Gutsy win

Townsend’s 18th birthday was April 16, making her the youngest American woman to reach the third round of the French Open in the last 11 years. The last American to do this before Townsend was Ashley Harkleroad in 2003, the Chicago Tribune reports.

Before turning pro, Sports Illustrated said Townsend was “a standout.” They report:

“In 2012, Townsend became the first American to hold the year-end No. 1 junior ranking since 1982. That year she won the girls’ singles and doubles titles at the Australian Open; the doubles title at Wimbledon and the U.S. Open; and the singles title at the prestigious Easter Bowl. She turned pro at the end of the year at 16.”

3. Townsend Is From Chicago

According to CBS Chicago, Townsend is from the Englewood neighborhood of Chicago’s South Side. Her parents work as school administrators, according to the WTA. Other notable residents of Englewood include Oscar-winning actress and singer, Jennifer Hudson.

After she became the no. 1 junior girls player in the world in 2012, Townsend began home schooling, but attended the The Ted Lenart Regional Gifted Center on Chicago’s South Side until she achieved that rank, according to ABC7 Chicago. The station reports she could be seen practicing on a local clay court with Bille Jean King, her mentor, before heading off to Paris.

4. She Was Almost Benched by the USTA For Being Overweight

Back in 2012, the USTA refused to pay for Townsend’s travel expenses for the US Open because of her weight, according to Slate. USTA general manager cited long-term health concerns as the organization’s refusal to finance her travel, but Townsend later told The New York Times the ordeal made her stronger as a person and a player.

“The biggest thing was just getting her to understand that she’s fine,” Garrison said. “Everybody doesn’t have the same shape of our bodies. She’s very clear on that now.”

“I challenge over half of these girls out here to do some of the stuff that she does,” Garrison said.

During her career, Garisson was the woman’s singles runner up at Wimbledon in 1990, a three-time Grand Slam mixed doubles champion and won the gold medal in women’s doubles at the 1988 Olympics in Seoul, South Korea. 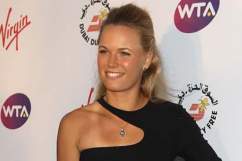 Loading more stories
wpDiscuz
0
0
Would love your thoughts, please comment.x
()
x
| Reply
Eighteen-year-old Taylor Townsend is the youngest American woman to reach the third round of the French open in 11 years.