Will QB Teddy Bridgewater get selected as a first round draft pick at the 2014 NFL Draft? Learn about this Louisville Cardinals player below.

1. Teddy Bridgewater Was the First College Grad in His Family

Bridgewater played college ball for Louisville, and was the first person in his family to earn a college degree. While at Louisville, he was named a freshman All-American by Rivals.com, CBS Sports, and Sporting News.

2. Teddy Bridgewater Got His Mom a Pink Escalade

When Teddy Bridgewater was a kid, he promised his mother he’d get her a Pink Cadillac Escalade when he became a professional football player. This year, he lived up to that promise and got her an Escalade. Watch the video above, directed by Spike Lee, to see how she reacted.

3. Teddy Bridgewater Expected to Be 1 of 4 QBs Grabbed in First Round of the Draft

Where will Teddy Bridgewater land? Sweet spot is picks 8 to 26. Teams in 2nd rd know of #Browns interest. 1 discussing trading up into 1st

Jason La Canfora of CBS Sports writes that Bridgewater is likely to be one of four QBs who are snapped up during the first round of the draft. If that prediction falls flat, he is at least expected to be one of the Top 50 players drafted this year.

4. Teddy Bridgewater Had a Subpar Pro Day, According to Some

ESPN notes that Bridgewater had a “subpar pro day,” and this could impact his chances of being a first round pick…particularly if he is sought buy a team with a home stadium in a colder climate.

Other weaknesses outlined by ESPN are as follows:

“There have been several common knocks on Bridgewater before the draft, his arm strength being the most common one. That could be a concern as the Vikings play the next two seasons outdoors, and would remain an issue for Minnesota in coming years as the team still plays late-season road games in Chicago and Green Bay.”

5. Bengals, Browns, and Vikings All Rumored to Be Interested in Teddy Bridgewater

Bleacher Report has a round-up of all the latest rumors about the draft, including the teams that are mostly likely to select Bridgewater. The Browns, Bengals, and Vikings are all teams who are rumored to have an interest in Teddy. 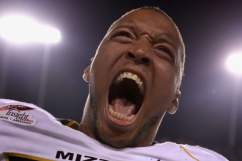